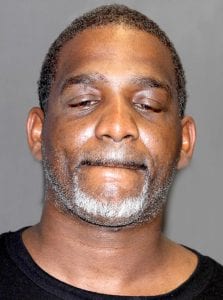 WESTFIELD – A city couple with a tumultuous history came to the attention of police again recently but this time their altercation was recorded on a home security video.
In May, city police responded to a Mechanic Street address and, Officer Joseph Kelly reports, found the residence is disarray. Kelly reports the female party was crying and said she “just wanted the male party to leave.”
She told Kelly that she is pregnant with the man’s child and that he had “punched and strangled her” during an altercation. The man said that the woman had struck him and thrown a knife at him resulting in what Kelly described as “a minor stab wound on his lower abdomen near his hip.”
The man, Damond G. Mohown-Fee, 41, then of 101 Washington St., Springfield, was arrested and arraigned the next day in Westfield District Court on charges of assault and battery on a family or household member, assault and battery on a pregnant victim and strangulation or suffocation of a pregnant victim.
The woman, Danielle L. Roberts, 34, of 15 Mechanic St., Westfield, was charged with assault and battery on a family or household member and assault and battery with a dangerous weapon and was arraigned in Westfield District Court on June 3.
Hearings for both cases were scheduled for July 25.
However, on July 21 police were again called to their Mechanic Street apartment and Officer Scott Schuster reports Roberts claimed that they had been in an argument before she attempted to call police. She said that when Mohown-Fee learned what she was doing “he violently grabbed her by the throat and slammed her onto the couch, momentarily not allowing her to call police.”
Roberts also told Schuster that she “is approximately eight (8) months pregnant with the defendant’s child.”
She supported her account of the incident by showing Schuster video recorded from a security camera in the apartment “which matched exactly how she described the situation.”
Mohown-Fee (now with an address listed as 15 Mechanic St.) was again arrested after a brief scuffle with the officers present and was arraigned the next day, July 22, on charges of assault and battery on a pregnant victim, resisting arrest, aggravated intimidation of a witness and assault and battery on a family or household member.
Both parties returned to court Thursday, July 25, for the hearings on the charges resulting from the first incident and each – claiming their Fifth Amendment rights – refused to testify.
All the charges were then dismissed.
At the same time, Mohown-Fee’s bail (which had been set at $1,000 for the new charges) was reduced to $500 and, after payment of the bail, he was released pending a Sept. 12 hearing.