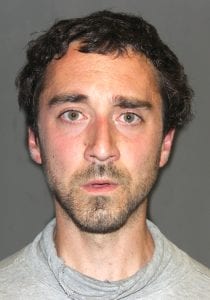 WESTFIELD – A city man who allegedly ran a ‘Stop’ sign is on probation after pleading guilty to drug charges in Westfield District Court.
Westfield police officer Zachary Coderre reports in a court document that on the afternoon of May 23, 2019, he was on routine patrol with fellow officer Scott Schuster when they saw a 2008 Dodge Caliber fail to stop for a ‘Stop’ sign at the intersection of Grand and King streets. The officers followed the vehicle and stopped it on Western Avenue.
Coderre reports that the operator, Nicholas J. Disanto, 31, of 69 City View Boulevard, Westfield, was “a party known to me for prior narcotics activity” and while Disanto was searching for his vehicle’s registration in his glove compartment Coderre “observed Lysergic Acid Diethylamide (LSD) in plain view”.
The officers then searched the car and found 45 bags of heroin in the glove compartment and an additional 442 bags of heroin under the front passenger seat. Coderre reports “15 bags of the 487 were re-packaged for distribution” and that Disanto was in possession of $210 in cash.
He was arrested and charged with possession of a Class A drug with intent to distribute and for possession of a Class B drug.
Arraigned the next day in Westfield District Court before Judge William O’Grady, Disanto was released on $500 personal surety.
Disanto has a history with the courts having been arrested on narcotics charges previously in Holyoke and twice serving jail terms for larceny.
In an affidavit filed by his court-appointed lawyer, Maria Barroso, in support of a motion to suppress statements, Disanto maintained that when he was stopped he was not told that he had been pulled over for a ‘Stop’ sign violation nor was he advised of his Miranda rights before he was questioned “to elicit incriminating information.” He also denied giving police permission to search his car.
The motion was eventually denied by Judge William E. Rooney but Disanto was allowed to plead guilty to possession of a Class A drug instead of possession of a Class A drug with intent to distribute.
Disanto also pleaded guilty to possession of a Class B drug (LSD) before Judge William A. Rota. He was sentenced to two concurrent sixty-day terms in the house of correction which were suspended. A six-month period of probation was imposed.