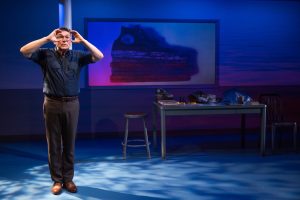 Author, actor, and playwright James Lecesne has brought his Off-Broadway hit The Absolute Brightness of Leonard Pelkey to Hartford Stage, as part of a national tour. Lecesne adapted the play from his novel for young adults, which first made the scene in 2008. He plays a dozen or so characters in a small New Jersey town, that is reeling from the aftershocks of a murder of a young, over-the-top gay teen.

As told from the perspective of a local detective, Lecesne, as Chuck DeSantis investigates the crime, gathering evidence, interviewing suspects with the suspense of a Law & Order episode, but laced with unique characterizations, and some humorous portrayals. Over the course of 80 fast-paced minutes, well-staged by Tony Speciale, the murder is solved, and the 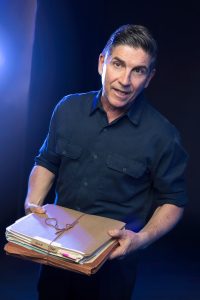 townspeople come to respect the positive impact that this edgy teen had on their lives.

The Absolute Brightness of Leonard Pelkey hits home, because although their have been impressive strides in gay rights and equality, bullying and hate still permeate our society, as homophobia and hate crimes have increased this year.

Lecesne is a master of solo performance and performances with multiple roles. He played multiple roles in Hartford Stage productions of The Mystery of Irma Vep and I Am My Own Wife. He is also accomplished as a writer who can blend drama with comedy, as he’s proven with his writing for Will & Grace.  The Absolute Brightness of Leonard Pelkey has substance and sincerity, and some great laughs along the way.

Aaron Rhyne’s projections on Jo Winiarski’s sparse and functional set, and Matthew Richards’ lighting design turn Hartford Stage’s stage into an intimate playing space for Lecesne and his cast of characters. The Absolute Brightness of Leonard Pelkey is great theatre, and proof that the theatre can tell a story with powerful themes  in an attention-grabbing way. 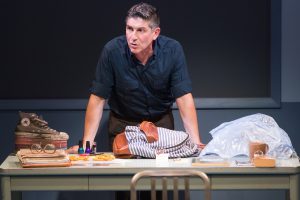 James Lecesne is a personal hero of mine. In his one-man show Word of Mouth, he’d created a character named Trevor. Movie producers Peggy Rajski and Randy Stone asked Lecesne to turn this character into something more, and they wrote and produced a short film Trevor, which won the Oscar for Best Live Action Short Film. The three co-founded The Trevor Project, our nation’s first national crisis intervention and suicide prevention hotline for LGBTQ and questioning teens and young adults..Through it’s many programs, Trevor Lifeline, Trevor Chat, Trevor Space, and more, these three people launched a program that has helped hundreds of thousands of young people in crisis.   For details on The Trevor Project: http://www.thetrevorproject.org/

Hartford Stage has partnered with several non-profit organizations that provide support and services to LGBTQ teens and young adults who have been victims of bullying and/or abuse. For details on some of the events and workshops surrounding the performances: https://www.hartfordstage.org/show/absolute-brightness-of-leonard-pelkey/.