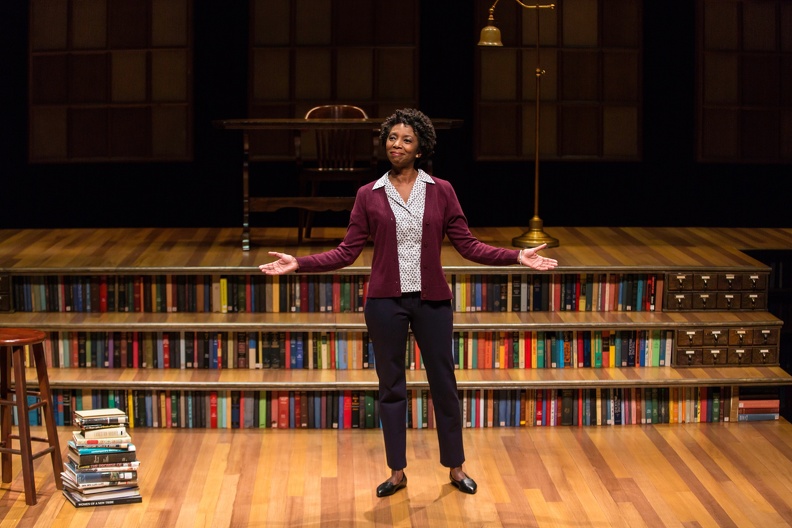 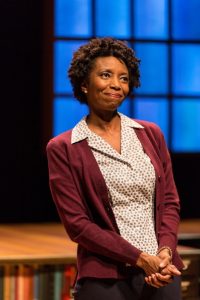 Good theatre tells a story. Great theatre makes that story compelling and draws the audience into the storytelling, connecting them with the storyteller. For me, the real challenge is the art of a solo performance, where one performer, without benefit of other actors to share the storytelling with, singlehandedly shares the story with an audience.

Hartford Stage has curated some great solo performances in recent seasons. In Mona Golabek’s The Pianist of Willesden Lane, Golabek told through words and music her mother’s story and how she survived the Kindertransport in World War II.. James Lecesne’s The Absolute Brightness of Leonard Pelkey was a brilliant work of fiction “ripped from today’s headlines”, which showcased Lecesne’s dazzling storytelling artistry.  Hershey Felder’s Our Great Tchaikovsky combined words and music to showcase a composer. And, now Sharon Washington tells her story, Feeding The Dragon, about a young girl who grows up in a library.

Sharon Washington’s dad was a custodian in an Upper West Side New York City library, and she and her family lived in an apartment within the library. Washington has achieved acclaim as an actress and playwright in New York. She originated the role of The Lady in the Kander and Ebb musical, The Scottsboro Boys. At the New York Shakespeare Festival, she co-starred with Denzel Washington in Richard III, and with Christopher Walken in Coriolanus. She plays Judge Virginia Hayes on TV’s Law & Order SVU. 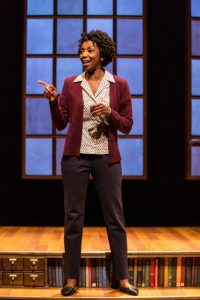 In a ninety minute intermission-less monologue, Washington plays multiple characters, narrated by Washington, as she grows up in New York. Her father, a South Carolinian, has worked in a variety of jobs, before becoming a custodian in the library. Her mother is a native New Yorker, and the grandmother shares the apartment. We meet Washington’s aunt and uncle in Queens, and on a road trip with her dad to South Carolina, we meet her dad’s relatives. Washington received the gift of education at the tony Dalton School on the East Side, and she continued on to college. Her family was doing the best they could to raise her in a turbulent changing New York in the 1970s.

Washington is a solid storyteller, and she’s given an able assist by director Maria Mileaf, scenic designer Tony Ferrieri, who has built a set punctuated with levels of books and card catalogue files, something that was once a staple in libraries, now replaced by computers. Lindsay Jones’s sound design, a mix of sound effects and music of the period complements Washington’s story, and Ann Wrightson’s lighting is effective.

Sharon Washington’s performance, considering she knows the material intimately, is quite varied. Her musical theatre experience combined with her deftness for Shakespearean language give her delivery nuance and lyricism. She plays to all corners of the theatre, and some of her characters are riveting. I liked her references to passages from books in the library that impacted her life, which made me wonder afterwards which books have influenced mine. 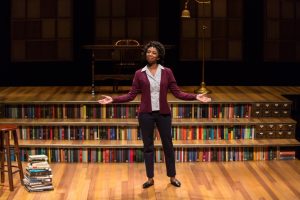 Hartford Stage has a lot of good background information on Feeding The Dragon at its website, so a quick look before heading to the theatre will enhance your theatre experience.

Next up at Hartford Stage is the Agatha Christie classic murder mystery Murder on the Orient Express, which runs February 15-March 18. Adapted by Ken Ludwig and staged by Emily Mann, this production was a major hit last season at The McCarter Theatre in Princeton.