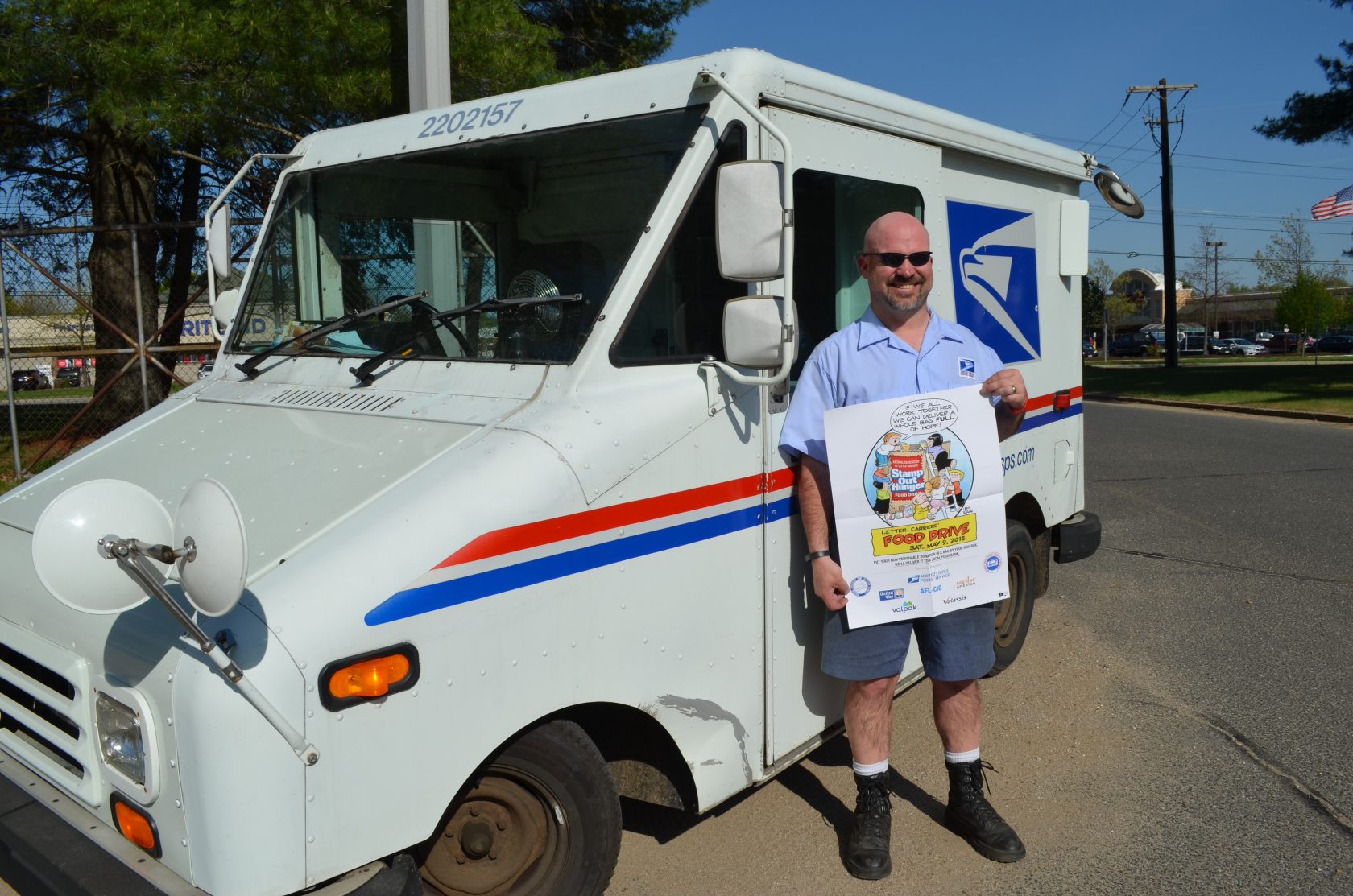 By LORI SZEPELAK
Correspondent
WESTFIELD – Tomorrow, the National Association of Letter Carriers (NALC), in conjunction with the United States Postal Service, will once again sponsor the annual Stamp Out Hunger Food Drive across the nation. Letter carriers started the drive 22 years ago to deliver food to the nation’s hungry.
A 5 percent increase in collecting nonperishable food items is the goal set by the Westfield Post Office, according to Norman Smith, supervisor of customer service.
“We collected close to 14,000 pounds of food last year and hope to surpass that amount this Saturday,” said Smith. “All food collected will be donated to the Westfield Food Pantry.”
Jake Golen, a 16-year letter carrier who covers the Elm Street and South Maple Street areas, joined Smith during the interview and noted that all of the flyers have been distributed to city homes as well as the mailboxes at the 8 West Silver St. postal site.
“We always have a very good turnout with people giving,” said Golen, noting he always fills his truck up at least once, unloads the food at the post office, and then resumes the remainder of his route.
“By the time I return from my second run, my truck is always at least half full again,” he said.
Both Smith and Golen noted that many residents will come to the door and hand the food to the carriers but nonperishable items in a bag can also be left at the individual’s mailbox for carriers to pick up.
“We ask that everyone check the expiration dates on the items before you put them out for pick up,” said Smith, noting that any expired items must be disposed of by the Westfield Food Pantry.
Locally, Western Mass Branch 46 of the NALC will be participating in the drive, with all of the major cities and towns with uniformed letter carriers and rural carriers joining in. Last year, more than 155,000 pounds of food was collected across the region and distributed to local food pantries. Nationally, more than 1,500 branches of the NALC collected 74 million pounds of food, boosting its total to 1.3 billion pounds since the start of the food drive in 1993.
For people who wish to drop off their donations at the Westfield Post Office, a large hamper will be available on Saturday from 9 a.m. to 4:30 p.m. in the lobby.
Smith explained that volunteers from the Westfield Food Pantry will be arriving around 3 p.m. on Saturday to start weighing and categorizing the nonperishable items donated. He added that the food pantry volunteers are like a well-oiled machine and have multiple trucks to keep the process moving smoothly.
“By the end of the day we also thank our letter carriers for all of their extra work carrying items by treating them to hamburgers and hot dogs on the grill,” said Smith.
“Since the need is greater than ever to support those who are in need of food, we thank everyone for donating to this great cause,” said Smith.
National partners of the food drive include the United Way, Valpak, AFL-CIO, Feeding America, Valassis and the National Rural Letter Carriers’ Association.
For more information on the food drive, call the post office at (413) 568-0096.