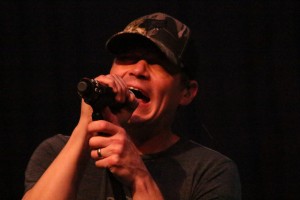 ALBANY, N.Y. – Fresh off the heels of a highly successful co-headlining arena tour with the band Daughtry, 3 Doors Down brought a seriously stripped down acoustic tour to The Egg in Albany, NY on Monday night. This tour dubbed, Songs from the Basement, had a very casual vibe to it and included couches on each side of the stage while each band member had their own stool to sit on. Albeit a big one, this truly did look like the band set up in someone’s basement. 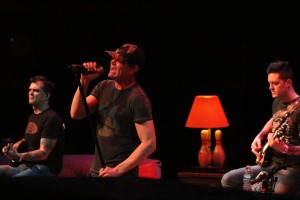 3 Doors Down opened the show with Father’s Son, which had all band members sitting except lead singer Brad Arnold. Arnold’s job for the evening was to not only sing, but to engage the crowd in conversation, with many in the audience participating with song requests. There was even a request from a young female fan to marry Arnold, which he quickly laughed off. Let Me Be Myself and Be Like That came next with each song earning to audience’s approval. After the third song, the band allowed some of the fans to come up on stage and sit on the couches for the rest of the evening… talk about a front row seat!
Landing in London, a song they originally recorded with Bob Seger singing the second verse and background vocals, came next with singer Arnold talking about touring and what it’s like being away from home. Introduced as his favorite song of all time, Garth Brook’s The Dance came out of left field, but fit perfect in this acoustic set.
Throughout the night and to much of the crowd’s delight, guitarist Chet Roberts kept making comments about actually playing in an egg. So, if you have never been to The Egg in Albany, it’s worth the trip. The venue is literally in the shape of a giant egg and everything in the building has a cylinder feel to it, even the rounded elevators are something to behold. After a few more comments, Roberts actually fielded a request from the audience for the theme song from the old television show The Golden Girls… which he then belted out the first two verses before laughing at himself for actually remembering the words.
Pages, Away From the Sun, and It’s Not My Time came next all of which had the crowd really involved both with clapping and some great back and forth banter with the band. Singer Arnold, who has been fighting a cold for 5 weeks, took the next few minutes to truly thank the crowd for being fans of the band and stating “we’re not rock stars, just a bunch of idiots who have been blessed by god to have some hit songs and amazing fans”. Arnold also stated, “We’re not going anywhere, we have some new music coming out soon and you will definitely see us touring back through area at some point”.
The rest of the set was left for three of the most popular 3 Doors Down songs, especially when played live, Duck and Run, Loser and Kryptonite. All three of these songs are off their 2000 release, The Better Life and proved to be an overwhelming favorite, based purely on the crowd’s reaction.
After a brief 5 minute break, 3 Doors Down started their encore with an amazing cover of Metallica’s Nothing Else Matters before finishing up with one of their own hits Here Without You.
This was such a great setting for this hard rock arena playing band to strip down their sound and stage production to let the audience become part of the show and be a part of Songs from the Basement. One last thing, if you are a fan of live music and going to different venues, by all means, check out The Egg in Albany. It is without a doubt an experience you will remember. Plus it’s only about 75 minutes away and perfect for a Friday or Saturday night out to see a favorite band in a new setting.