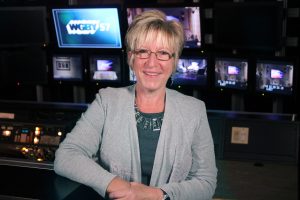 For nearly 35 years, Page has been reporting to 44 Hampden Street in Springfield to continue her service in public media. This year, that exceptional tenure is being honored by the National Academy of Television Arts & Sciences (NATAS) Boston/New England Chapter as it bestows on her The Silver Circle Award.

The Circle Award is a special recognition from NATAS for veteran TV professionals who have made significant contributions.  Silver Circle and Gold Circle candidates must have a minimum of 25 years and 50 years, respectively, of service in television.

“Lynn Page epitomizes the very best of our industry,” says WGBY Executive Producer Tony Dunne (Connecting Point and As Schools Match Wits). “Her career is both the storybook tale of a rise from an entry-level position to lead management and also a lesson in dedication, hard work, and the pursuit of excellence.”

Page began at WGBY as an intern in 1983. Soon after, she became a part-time receptionist. From there, her role at WGBY grew and broadened at each subsequent turn. Page has served as Production Coordinator, Assistant Production Manager for Station Affairs, Director of Program Scheduling & Broadcast Operations, Director of Broadcasting, and now as Deputy General Manager, where she oversees Local Production, Engineering, Broadcast Operations, Production Services and Education & Outreach.

“Telling real stories about local people is what public television is all about,” says WGBY General Manager Anthony V. Hayes, “and Lynn Page has been doing it for 34 years. She cares deeply about western New England, and we all benefit from her experience and accomplishments.”

During her 34-year tenure, Page has created and produced a whole host of award-winning, Emmy-nominated programming, including the award-winning Making It Here: Teen Style, and the popular local choral competition Together in Song. She also provided a showcase and national springboard for world-class documentary filmmakers in her role as Programming Director.  She most recently helped develop the groundbreaking local bilingual series, Presencia, as well as live, community forums on such topics as racism, the opioid epidemic, and The Vietnam War (airing live Thursday, Nov. 9).

“I am honored to be part of a group of veteran broadcasters dedicated and passionate about exposing our audiences to diverse, thought-provoking content,” Page says. “I am proud to be working with teams that care about the art of storytelling. People trust public media and, at the end of the day, that is what matters the most.”

For Page’s many colleagues, however, it’s not her record that’s most outstanding; it’s her character.

“Lynn is a true champion of the community WGBY serves,” says WGBY Director of Local Productions & Services Keith Clark (a past Silver Circle recipient himself with 31 years of service at the station). “To Lynn, it’s never a question of ‘why’; it’s ‘why not.’ It’s not a matter of ‘how come’; it’s ‘how can we.’ It’s not ‘whether we do this,’ but ‘when we do it.’”

A lifelong resident of Chicopee, Page enjoys photography, gardening, and spending time with her family and granddaughter.

Page will be honored by NATAS at the Silver Circle Awards Celebration on Thursday, Nov. 16 at the Seaport Hotel in Boston.