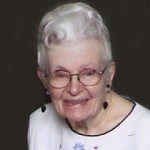 WESTFIELD – Alice H. (Nutter) Durphey, 96, longtime resident of Westfield died Wednesday, January 23, 2013 surrounded by her loving family. She was born in West Springfield on February 19, 1916 to the late Albert and Grace (Williams) Nutter.
She was educated in West Springfield and was an Alumni of American International College. Alice has been a resident of Westfield since 1946. She worked at the Institute of Living in Hartford, and the city of Springfield before joining forces with her husband in the family business, C. Durphey Trucking, Inc., doing customer service and office work. Shortly after retiring in 1981, she and her husband became very involved with growing & showing gladiolus. They were also very active in eight glad clubs from different states. She was also president of the PTA, and very active with the Westfield Women’s Club, and the First Congregational Church. She loved traveling and was always politically involved with keeping Westfield a nice place to live. Many people remember her from the roadside flower stand they had on Southwick Road. She will also be remembered for always thinking of others first.
She was predeceased by her husband, Cecil Durphey who passed away October 16, 2012. She leaves two sons, Ralph Durphey of Westfield, Gordon Durphey and his wife Joan of West Springfield; her daughter, Cindy Crepeau and her husband Paul of Southwick; six grandchildren, Shannen Durphey and his wife Reva, Amber Helems and her husband Michael, Jenny Kapinos and her husband James, Scott Crepeau, Brad Crepeau, and Sarah Crepeau; seven great-grandchildren, and many nieces and nephews. She was predeceased by her five brothers, Ralph, Roger, Walter, Wes, and Charlie Nutter.
Family and friends are invited to attend Alice’s Memorial Service on February 9th, at 11:00 a.m. in the First Congregational Church, 18 Broad Street, Westfield.
Memorial contributions may be made to the Western Mass. Glad Society, c/o Vern Wells, 11 Steiger Drive, Westfield, MA 01085 or First Congregational Church, 18 Broad Street, Westfield, MA 01085.
Funeral arrangements entrusted to Southwick-Forastiere Funeral Home. For more information, please visit www.forastierefuneralhome.com