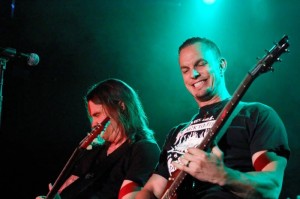 BOSTON- A true Rawk and Roll show came roaring into Boston Tuesday night in the form of Alter Bridge and Monster Truck. Both bands touring in support of new releases, played to a sold out and frenzied crowd at The Royale in the heart of Boston’s theater district.
Canada’s very own Monster Truck opened the show promptly at 8 and ripped through a strong 35-minute set. Their set consisted of songs from the full length release Furiosity and The Brown EP. Monster Truck has been getting a lot of radio play lately, and coupled with their live shows, the positive press has been rolling in. The band, led by lead singer/bassist Jon Harvey, opened the show with The Lion and continued rawkin’ with their radio hit, Old Train. Monster Truck also played Undercover Love, Sweet Mountain River and Seven Seas Blues. The band finished the night with Call it a Spade. Allotted for only a 35-minute opening set, Monster Truck provided the crowd with a small sample of what this band can do live. They will be leaving this tour to hook up with Alice in Chains for a few dates…  and they are well worth checking out!
After a short break to take down Monster Truck’s equipment, Alter Bridge took the stage to a huge roar from the crowd and kicked off their set with a new song Addicted to Pain. Alter Bridge consists of Myles Kennedy on vocals and guitar, Mark Tremonti on lead guitar, Brian Marshall on bass and Scott Phillips on drums. The rhythm section of Tremonti, Marshall and Phillips form the band Creed when not in Alter Bridge. Kennedy also lends his vocal talents to former Guns n Roses guitarist Slash, when he tours and records.
The song White Knuckles came next followed by Come to Life, both off the 2007 release Blackbird, which some consider to be AB’s most solid release. Another new song, Cry of Achilles, off the 2013 release Fortress. Alter Bridge was flying through the set and showing Boston why they are considered one of the best live Rawk bands around today. Brand New Start, Ghost of Days Gone By and Ties That Bind were followed by a new twist to Alter Bridge’s sound and live performance. Guitarist Mark Tremonti took a turn on lead vocals with the song Water Rising, also from their most recent release, Fortress. Great to see the band having him singing on their latest release, and also adds a nice element to their live show.
The band continued to plow through their set with some AB classics like Broken Wings, Metalingus and One Day Remains. Up next came Blackbird, possibly one of the best songs of the night and a staple for almost all AB shows. This song had to crowd singing or should I say yelling along with the band during the chorus and then watched as Tremonti and Kennedy traded guitar solos… amazing!
The show closed with Open Your Eyes and the band left the stage for a couple of minutes to regroup and encored with two of my favorites, Find the Real and Rise Today. Rise Today has become the unofficial closing song for Alter Bridge. Two great songs to end a great night of Rawk.
If you have never listened to Alter Bridge or have seen them live and are a fan of Rawk music… then you are missing out! It’s hard to believe the band has been around for 10 years now and have put out four amazing releases of the most consistently good music. As you can read by my review, I can’t say enough about how good this band is live. They are the definition of RAWK!