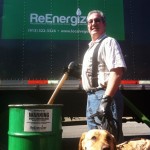 ReEnergizer founder Peter McAvoy and Chief Morale Officer “Crisco from Frisco” collect oil at Paisano’s Restaurant in Southampton. The company will pay restaurants for their used cooking oil and recycle it into fuel that can be used in furnaces and engines. (Photo submitted)

HOLYOKE — On the first floor of a rambling brick mill building located in Holyoke’s Canal District, Peter McAvoy, the proprietor of a vegetable oil recycling business known as ReEnergizer, is doing his part not only to break America’s addiction to fossil fuels, but to build a new regional energy economy in the Pioneer Valley.
ReEnergizer, which swung into full commercial operation only two years ago, purchases used fryer oil from more than 200 area restaurants and recycles it into a product known as Straight Vegetable Oil (SVO) which  can be directly substituted for petroleum products in properly modified engines and furnaces.
But that’s not all. Some of the oil is shipped to refineries that remove glycerin and other impurities. The result is biodiesel fuel, that can be used directly in standard diesel engines and home heating systems.
“Biodiesel is a direct replacement for home heating oil or diesel fuel; just pump it into the tank and fire it up,” said McAvoy.  EPA studies show greenhouse gas emissions are reduced by up to 67% when biodiesel replaces petroleum-based fuel, he added.
But soon even biodiesel fuel will be produced locally, and ReEnergizer is poised to play a key part. Northeast Biodiesel — a subsidiary of the Franklin County-based Coop Power — is building a plant in Greenfield that will produce biodiesel fuel from recycled vegetable oil, and McAvoy has an agreement to supply that plant with all of the vegetable oil that it needs.
To that end, he’s actively recruiting new restaurants and institutions to sign up for his service.
“Not only will we pay you for the oil, but we make it easy and seamless,” he said.
“Most companies that pick up used vegetable oil end up funneling it into the livestock feed industry. We made the decision early on that our purpose would be replacing foreign oil with clean, green domestic energy. So when you sell to us, you can feel good knowing you’re doing the right thing.”
From Idea to Inception
McAvoy has developed a unique process, built by hand, where the oil is heated, pressed through filters, and separated by centrifuge to remove water and particles. Deploying a small fleet of specially outfitted trucks, he and his workers collect food service oil throughout Massachusetts, Connecticut, New Hampshire, Vermont and New York.
But before launching ReEnergizer, McAvoy was a lawyer in the field of charitable giving, working for the Baystate Health Foundation. Interviewed outside the loading dock of his facility on a sunny day in February, McAvoy explained what inspired him to shift gears and start a regionally based vegetable oil recycling business.
“I wanted to get back to working with my hands. My great-grandfather was a blacksmith in Williamsburg, who had a shop where Chef Wayne’s is now,” he said. “And my father was the type of guy who could fix anything. That’s how I was raised. I wanted to be able to say, at the end of the day, that I’d produced something of value.”
But philosophical and patriotic issues were at play as well.
In 2008, he had just finished reading Deep Economy, in which author Bill McKibben describes a workable, regional economic model where people know who they’re doing business with and neighbors help neighbors.
“I was already fueling an old diesel Mercedes on SVO” said McAvoy. “And I’d been thinking hard about how a used cooking oil recycling business might help lessen our regional dependence on foreign petroleum.”
What finally inspired him to file the incorporation papers for ReEnergizer was a series of buffet-style meals at a Wounded Warriors event with former Assistant Secretary of Defense Paul Wolfowitz, a primary architect of the Iraq Wars.
In 2004, McAvoy’s oldest brother John suffered injuries as a result of his service during the Iraq War.
“John went from being a vibrant professional nurse practitioner who taught and practiced emergency medicine to a permanently disabled veteran with a Parkinsonian disease complex,” he said.
In the Spring of 2008, McAvoy accompanied his brother to the 23rd annual Wounded Warriors Winter Week at Aspen Ski Resort in Colorado, where he watched soldiers who had lost limbs learn to ski with assistive devices.
“It was heart-wrenching and inspiring,” said McAvoy.
“I wanted to ask Wolfowitz some tough questions about paying for our petroleum economy with soldiers’ lives, but I bit my tongue out of respect for the war veterans at the table.” he said. “But I knew in that moment what I had to do.”
The ReEnergizer incorporation documents had been sitting on McAvoy’s laptop computer for months. After a third meal with Wolfowitz, he went back to his hotel room and pressed the “send” button.
“I became convinced that the most patriotic act I could accomplish  involved breaking the U.S. addiction to foreign fossil fuels,” he said. “It’s fitting that ReEnergizer got its start beside the slopes of the Aspen Ski Resort, surrounded by thousands of proud, wounded warriors.”
His goal over the next few years is to displace 60,000 gallons of fossil fuel a month, which means he’ll have to grow his business by a factor of ten. To that end, he’s actively marketing his services.
“We’re building a renewable regional energy economy here in the Northeast, and it’s exciting to watch it grow,” he said.
With a simple phone call from a food service provider, McAvoy and his crew can be there the next day to set up collection drums. Householders can find ReEnergizer’s used cooking oil recycling bins at a growing number of DPW recycling stations.
ReEnergizer can be found on the web at www.localvegoil.com. Peter McAvoy can reached by telephone at 413-322-3324 or via email at [email protected]