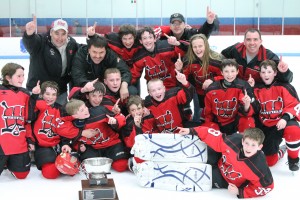 Division: Squirt B
Sunday, March 11th – Amelia Park, Westfield
Westfield Jr. Bombers 3 Holy Name Stars 3
This was a game that the fans were going wild for. The scoring started with Ciro Calvanese slipping the puck past the goalie with the assist coming from Peter Chrisanthopoulos. Holy Name came back to tie it at 1.
Holy Name scored the only goal in the second period.
In the third period, Westfield tied the game at two all from a goal by Peter Chrisanthopoulos assisted by Branden Waitt. Holy Name minutes later took the lead. The Westfield team never gave up and came back to tie it at 3 on a goal by Nick Ensign assisted by Branden Waitt.
The hard play of Thea Glenzel, Pat Martell, Reid Hannan, Brian Daly, Cam Porter, and Alex Fisher made this game one for the fans to enjoy. CJ Czarnecki had 10 saves in net and played great.

Division: Squirt B
Sunday, March 18th – Amelia Park, Westfield
Westfield Jr. Bombers 7 Franklin County 0
The game started very slowly but once Westfield got in their grove they shutout the FCHA team 7-0.
In the first period Peter Chrisanthopoulos scored the only goal with the assist coming from Ciro Calvanese.
The second period was also low scoring with the only goal coming from Branden Waitt.
In the third period is when the Westfield team dominated by scoring 5 goals. Nick Ensign started it all with a beautiful goal on an assist by Connor Fitzgerald. Branden Waitt scored the next goal on his second assist by Connor Fitzgerald. Minutes later, Peter Chrisanthopoulos scored on an assist by Alex Fisher. Connor Fitzgerald scored next on an assist by Brian Daly. The last goal was his third of the game (hat trick) – it was scored by Peter Chrisanthopoulos assisted by Cam Porter.
The great defensive play of Pat Martell, Thea Glenzel, Aidan Fitzgerald, and Reid Hannan was the key to the victory. CJ Czarnecki recorded another shutout.

Division: Peewee 2
Saturday, March 24th – Olympia Ice Arena, West Springfield
GSL Semi-Final: Westfield Jr. Bombers 6 Pioneer Valley Lightning 2
The Pee Wee Two Jr. Bombers cruised through the semi-final round of the GSL playoffs with a convincing 6-2 win over the Pioneer Valley Two team as five different Westfield players scored goals.
Quinn Powers got the scoring started for Westfield as he took a pass from Logan Klein behind the PV goal, and ricocheted a shot off the back of the goalie and into the net for a 1-0 lead. That would be all the scoring in the first period. Westfield would score two more goals in the second, as Isak Lund padded the lead to 2-0 before Andy Warren ripped a shot from the blue line that beat the Pioneer Valley goalie and gave Westfield a 3-1 lead after two periods.
The third period was Kenny Bonney’s time to shine. First he took a pass from Isak Lund and gave Westfield its two goal lead back at 4-2, and then finally, after a Gavin Rock goal (on an assist from Wyatt Jensen) had given Westfield its first three goal lead of the game, Bonney finished the scoring with his second goal of the game giving Westfield the 6-2 lead.
Val Reopel gave Westfield the strong goaltending it needed, making 17 saves to back up a sound defensive effort led by Evan Glenzel and TJ Willis.

The Pee Wee Two Jr. played a souped up Springfield in their Championship tilt, and the Capitals proved a bit too strong in beating a determined Jr. Bomber squad.
Westfield found itself down 3-0 midway through the second period when defenseman Wyatt Jensen ripped a shot from the top of the circle that made its way through a crowd gathered in front of the goal and found the back of the net to cut the Springfield lead to 3-1. Devin Baker gave an excellent screen on the shot to make sure the goalie had no chance to make a save. Then, with the second period winding down, Kenny Bonney took a feed from Riley Siart and Isak Lund and beat the Springfield goalie to close the deficit to 3-2 with only 8 seconds left in the period.
Unfortunately, Springfield scored the next two goals to lead 5-2 with only 30 seconds remaining in the game. Thinking the lead safe, the Springfield coach removed his starting lineup from the ice. Big mistake. Gavin Rock took the ensuing faceoff and rushed down the ice and beat the goalie top side to close the gap to 5-3 with 20 seconds left. Rock then won the next faceoff, executing a perfect give and go with wing Joey Czarnecki, and again beat the dazed and confused Springfield goalie to make it 5-4 with 11 seconds remaining.
The Springfield coach had seen enough, and made sure to get his starting lineup back on the ice to run out the final 11 seconds, leaving the Jr. Bombers one goal short of a title. Nevertheless, the Jr. Bombers never gave up and made the game tight right to the end. A big congratulation goes out to Coach Chris D’Angelo and his staff for coaching this group of ‘B’ kids to a fifth place finish in the strong GSL ‘A’ league.

Division: Peewee A
Saturday, March 24th – Olympia Ice Arena, West Springfield
GSL Semi-Final: Westfield Jr. Bombers 4 Pioneer Valley Lightning 0
GSL Final: Westfield Jr. Bombers 3 Holy Name Stars 0
Westfield wins Peewee A GSL Championship!
The Westfield Peewee A took a 24 win, 1 loss and 2 tie regular season record into the GSL play-offs on Saturday, March 24th. In most situations, a record like that would land you in first place in your league. Not in this case.
Westfield finished in second during the regular season to an undefeated Holy Name Stars team that finished with a 24 win, 0 losses and 3 tie record. Holy Name came into the GSL play-offs on a high note having gone to the State Championship and losing to Dorchester, MA the weekend prior.
Both teams advanced with semi-final victories on Saturday morning. Westfield dispatched Pioneer Valley Black 4-0. Holy Name overcame an early 2-0 deficit and steamrolled over Amherst 7-2.
An energized Westfield team came out firing right from the drop of the puck in the Peewee A final against Holy Name. Westfield scored three first period goals off the sticks of Brandon Peaslee, Cam Sporbert and Katie Neilsen. Westfield withstood a 2nd period charge from the Stars, keeping them off the board thanks to great offensive forechecking, a stingy defense and a hot goaltender in Cam Parent. Parent notched several spectacular saves in the third period, securing a shutout and giving Westfield the Championship.
The victory washed away some of the heartache from the 2010-2011 season. Half of the core of the team lost to Holy Name in the Peewee A final last season on a goal as time expired. The other half of the core of the team lost the Squirt A final last season to an Amherst team after a near perfect regular season.
Westfield finishes the GSL season with 26 wins, 1 loss and 2 ties in addition to winning a Thanksgiving Tournament Championship in Warwick, RI and a Runners-Up trophy in the Lake Placid International Tournament in early March.
Congratulations to Head Coach Mario Boucher, assistants Luke Beauchemin, Scott Bussell, Bill Cottengim, Ray Neilsen, the players and families of our Peewee A team.

Division: Squirt C
Saturday, March 24th – Olympia Ice Arena, West Springfield
GSL Semi-Final: Ludlow 5 Westfield Jr. Bombers 1
It was a case of too little too late for the Junior Bombers as they fell to Ludlow 5-1 in the Squirt 3 Semifinal at the Olympia in West Springfield. Down 2-0 before two minutes had passed, Westfield looked tired and could not get their game together. Too many broken plays and odd-man rushes on goalie Noah DuBoff put Westfield in a 5-0 hole until halfway through the third period when the offense started to click and began to put pressure on visiting Ludlow. Bobby Miele broke the shutout with only 57 seconds left in the game with assists to Alyssa Warren and Noah Jubb. The end of game effort to break up the shutout was a small, but moral victory for a Westfield team that needed a confidence boost going into the Consolation Game later in the afternoon.
Division: Squirt C
Saturday, March 24th – Olympia Ice Arena, West Springfield
GSL Consolation: Westfield Jr. Bombers 2 Pioneer Valley Lightning 1
Keeping the momentum going from the third period of the prior game, host Westfield skated away with a 2-1 victory in the Squirt 3 Consolation Game against Pioneer Valley. Noah DuBoff was stellar in goal and the defensive work of Jolie Walts, Tommy Lawry, Alyssa Warren and Noah Jubb kept him out of trouble throughout the game. A power play goal from Steven Shaw opened the scoring early in the first, and a fantastic end to end rush goal from Joey Digennaro with 1:32 remaining sealed the victory. Extraordinary efforts from Keely Connor, Ian Lemieux and Clarissa Jarrell kept the pressure on the PV forwards not allowing them to breakout of their zone and get anything started and great forechecking from Nick Langlois and Bobby Miele kept the defense at bay. Westfield finishes the season with a final record of 17-6-5.