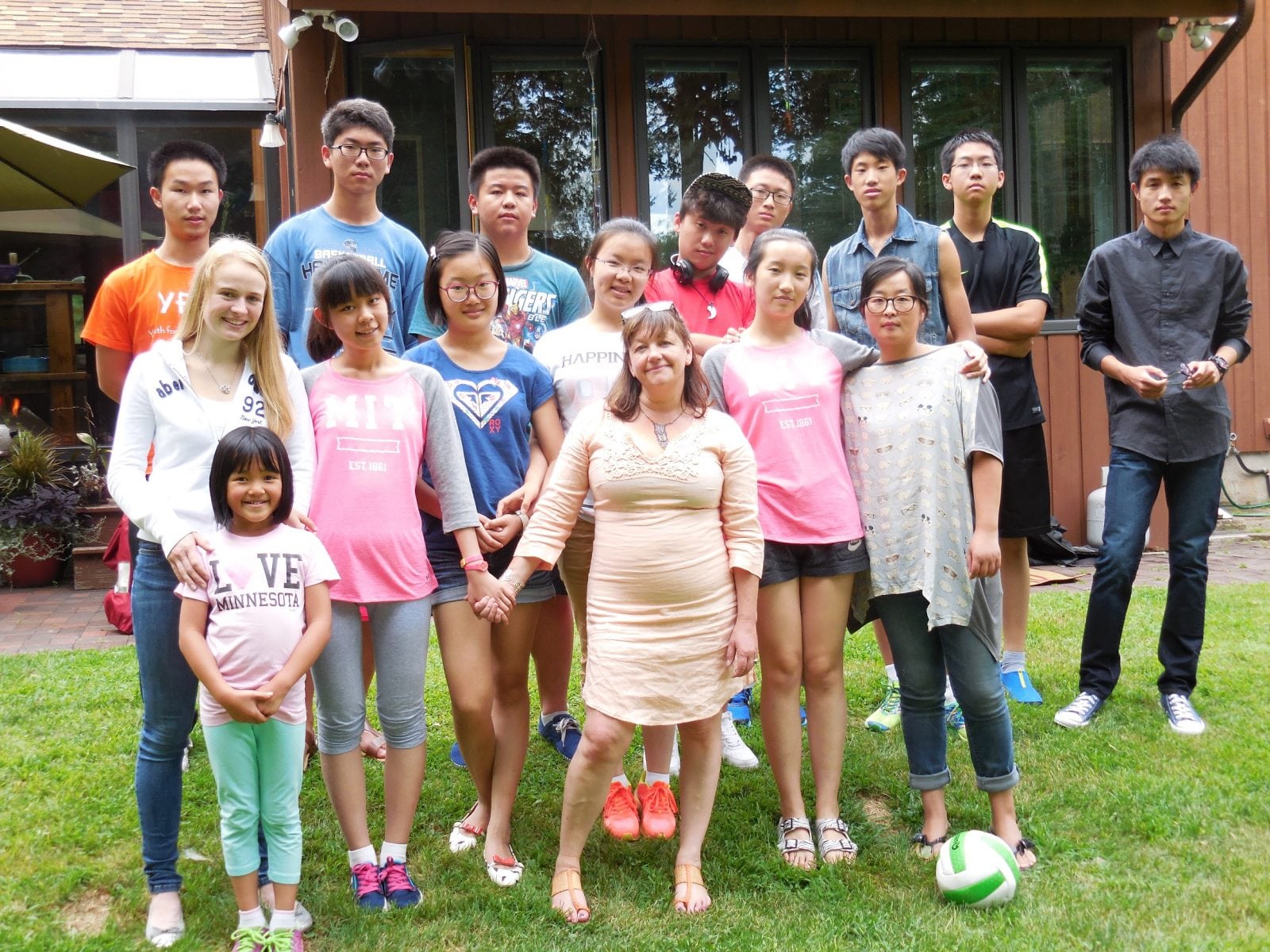 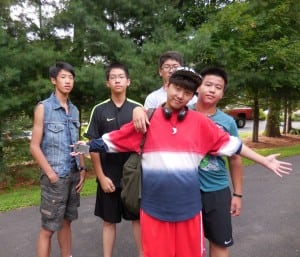 Some of the boys with ZhongZhen “Frank” Lou. Frank is a singer who likes pop, dj and dance music. He wants to pursue singing as a career. (Photo by Amy Porter)

WESTFIELD – On Thursday evening, a dozen high school teenagers from China, their Chinese chaperone Xuan “Tanya” Zhou, their host families and friends gathered for a farewell barbeque at the home of Colleen Powers Andrews. The students had just spent three weeks here in a cultural immersion program sponsored by Youth For Understanding (YFU). 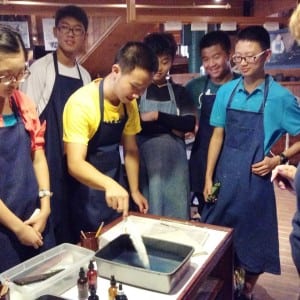 The group did a printmaking project while visiting Old Sturbridge Village.

Andrews, who had two boys stay with her family, explained that she had been an exchange student herself, so she understood the enrichment aspect.
“I wasn’t as brave as these kids. I went to the U.K.,” she said, adding, “They’ve done really well for 15- and 16-year-olds still in high school.”
YFU is a non-profit international educational organization with organizations in more than 50 different countries. More than 260,000 students and their host families have benefited from the support and expertise of YFU. The YFU global network is united by the belief that full cultural immersion is the most effective means to gain the skills needed to thrive in an increasingly multicultural, interconnected and competitive global society. 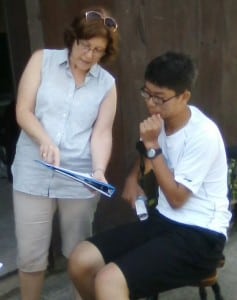 Virginia Warner, YFU Program Coordinator, said the China Program was started five years ago, but is new to this area. She said the program involves a combination of English and cultural immersion, visits to colleges, a host family experience, and a service component. What most surprised her, she said, “is that most of the things we had planned actually worked.”
The students had six three-hour classes of English over the course of their stay with Dr. Teresa Benedetti, who teaches at Minnechaug Regional High School, and practiced speaking English with their host families. 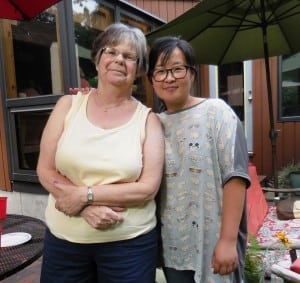 Andrea Cook-Hewitt of Westfield hosted the group’s chaperone, Xuan “Tanya” Zhou, who teaches English in a small city near Shanghai in China. (Photo by Amy Porter)

As a group, they visited Harvard and MIT, Amherst and Williams Colleges, and Bay Path University. Some visited the Basketball Museum, and some the Butterfly Museum. They went to Old Sturbridge Village, to Mystic Seaport and to Masquamicut beach in Rhode Island.
They also did service projects at the Gray House in Springfield, and at Our Lady of the Blessed Sacrament in Westfield.
Sheila and Patrick Conroy of Westfield took their students, Siyi Fan and Xinyuan Zhang to hear Yo-Yo Ma at Tanglewood.
“It was cool,” Siyi said. 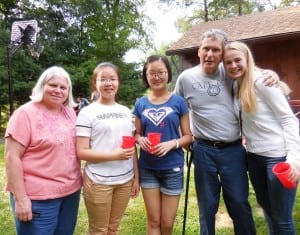 Sheila and Pat Conroy of Westfield hosted Siyi Fan and Zinyuan Zhang. On the right is Nora Backer, and exchange student from Norway who just arrived in the U.S. Backer will be staying with a family for the year and attending Springfield Central High School. (Photo by Amy Porter)

She also talked about making cookies and blueberry jam and pancakes with blueberries they picked in Chesterfield. Several of the students also made dumplings for their families. Zichen “Peter” Li and Bowen “Mox” Xie, who stayed with MaryAnne Davin in Huntington, had to consult with Peter’s father in China for the recipe. Mox held the phone while Peter received the instructions. 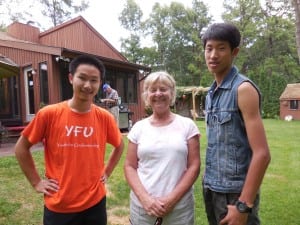 The Conroys have hosted 19 YFU exchange students over the years, and Sheila also volunteers for the organization. She brought Nora Backer, a new exchange student from Norway who had just arrived in the USA, to the farewell party at the Andrews. Nora, who is 17, will be staying with a family and attending Springfield Central High School in the fall. Altogether, YFU will be hosting seven exchange students in western Mass. this year. One student from Germany will be staying with the Andrews family and will attend Westfield High School. 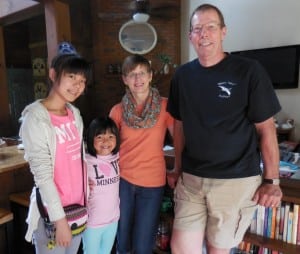 XueWei “Wei Wei” Change stayed with Don and Lauri Hultman of Williamsburg, and their daughter Sarah, who was born in China, and enjoyed having a big sister come to stay. (Photo by Amy Porter)

Dan and Lauri Hultman of Williamsburg and their daughter Sara, who was born in China, hosted Xuewei “Wei Wei” Cheng. When asked about her time here, Wei Wei spoke about Dan taking her fishing on a boat in the Connecticut River with Sarah. Both of them caught two small-mouthed bass, which they released back into the river.
Many of the students pointed to the hail that pelted them as they were just about to visit Harvard as the most surprising event of the trip. Tanya, the Chinese chaperone who is an English teacher in a small city near Shanghai, said she was impressed by the sudden changes of weather here. 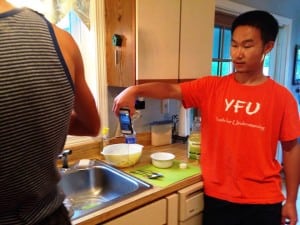 Mox holds the phone so that Peter’s dad in China can view his son making dumplings and give long distance instructions.

“This May, we had heavy hail in our city, and many cars and windows were broken,” she said, adding that some of the students who came from the north of China may never have experienced hail before.
Tanya stayed with John and Andrea Cook-Hewitt of Westfield. She said, “Andrea is a very nice woman – like a mother to me.” Andrea said she liked Tanya’s observations when she saw the Atlantic Ocean for the first time in Masquamicut. She thought the waves were big, and the beach not as crowded as the beaches in China.
Tanya was also impressed by the colleges they visited. 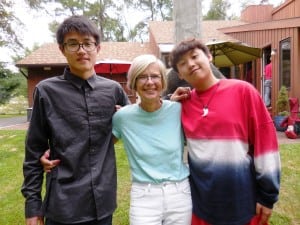 “There are so many gorgeous colleges near here in the state of Massachusetts. I just knew about Harvard and MIT, but found many other colleges like Amherst and Williams. The residents of Massachusetts should be very proud,” she said.
She also said that Virginia Warner and Sheila Conroy made the perfect arrangements for the trip. 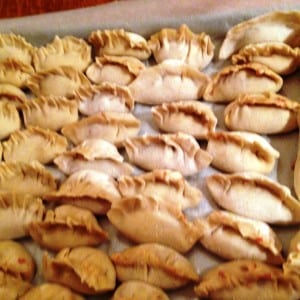 Warner said that she had been surprised by the diverse personalities and interests of the students, who came from four different regions of China and did not know each other before the trip. Two of the boys with diverse interests were ZhongZhen “Frank” Lou, who stayed with Leslie Clark-Yvon of Westfield, and Chengye “Bruce” Yu, who stayed with Mary and Andy Wilson of East Longmeadow.
Frank talked about a bike ride they took along the rail trail from Easthampton to Northampton, and also the go-carts they went on. Frank is a singer who likes pop, dj and dance music. He said he would like to pursue singing as a career.
Bruce is interested in business, and said his dream college is the Wharton School of Business. He found the visits to the colleges very interesting, especially Bay Path, where he was fascinated by its religious history and stories of hidden rooms. Bruce, who was considered the jokester in the group, said not only did they come to learn about America, but that he was here to help America appreciate China.
Friday, the students were headed out to meet up with two other China Program groups, and spend a week visiting New York City, Washington, D.C. and Boston before flying home from Newark.