Next To Normal
The Theater Project at West Springfield’s Majestic Theatre presents the Pulitzer Prize winning musical “Next to Normal” through June 1. Tom Kitt and Brian Yorkey profile a seemingly typical suburban American family, who is torn apart by the mother’s challenges and struggles with bipolar disorder. The family, all survivors, learn to take care of themselves and each other.
“Next to Normal” picked up Tony Awards for its score, orchestrations, and its leading actress, Alice Ripley. The musical had a successful Broadway run and national tour, and productions have been mounted around the globe. Tom Kitt and Brian Yorkey are currently represented on Broadway by the new musical hit, “If/Then”, which stars Idina Menzel. 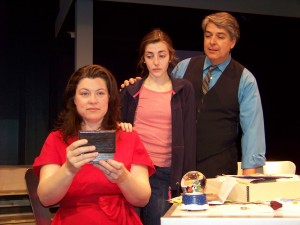 Actors, from left, Sue Dziura, Emery Henderson and Tom Nunes are pictured in a scene from “Next to Normal” at West Springfield’s Majestic Theater. (Photo courtesy of Lee Chambers.)

“Next to Normal” is one of the few Broadway musicals of recent years, which is not an adaptation of a film hit, play, or novel.
Theater Project Producing Director Danny Eaton directs the play, and music director is Mitch Chakour with set design is by Greg Trochlil, costumes by Dawn McKay, and lighting design by Dan Rist.
For tickets: 413-747-7797 or www.majestictheater.com
The Springfield Symphony: 70th Anniversary Season Finale
The Springfield Symphony Orchestra is 70 years young, and to celebrate the milestone, the full orchestra and Springfield Syphony Chorus join forces to perform Leonard Bernstein’s moving call for piece, “The Chichester Psalms” (May 3). On the program is W. Schuman’s “American Festival Orchestra” and Rachmaninoff’s dramatic Symphony No. 3 in A minor. Maestro Kevin Rhodes conducts, and Nikki Stoia directs the Springfield Symphony Chorus.
In a cultural world, where several regional orchestras have folded in recent years, while others have scaled back their concerts and performance schedules, The Springfield Symphony Orchestra has survived and thrived. They are a bright light in Springfield’s often malaligned reputation. They bring people downtown. They bring music to the public schools. They spend their money in the area.
For tickets (and for information on the 71st season): 413-733-2291 or www.springfieldsymphony.org.
Alonzo King LINES Ballet
The UMass Fine Arts Center’s eclectic season closes with a performance by the nationally acclaimed Alonzo King LINES Ballet on April 27. The celebrated contemporary ballet company, molded by dance visionary Alonzo King, draws on classical ballet technique with modern takes on today’s cultures.
The LINES Ballet has a program of diverse origins planned for their Fine Arts Center performance. The first half of the show consists of two works danced to classical music – Vivaldi’s aria Sposa Son Disprezzata, and Bach’s Concerto for Two Violins in D minor. After intermission, the company presents “Resin,” a work comprised of many smaller movements danced in groups, duets, and solos.
“Resin” is an elegant and expressive display of what makes the LINES Ballet stand out from the world of classical ballet; it is set to Sephardic music, with roots in the Jewish communities of medieval Spain. Musical curator and ethnomusicologist Francesco Spagnolo explains, “the music of the Sephardic Jews has come into contact with music from Europe, including Italy and the Balkans, and especially with the Arabic and Turkish musical worlds.” Rare archival field recordings are interwoven with Judeo-Spanish songs by early-music artist Jordi Savall, and the stage is transformed into a shimmering and timeless landscape.
For tickets: 800-999-UMASS, 413-545-2511 or http://www.fineartscenter.com/
Keep in Mind…
***Color in the Cage Performance Showcase, a fundraiser for the Amherst Survival Center, at Curry Hicks Cage, UMass, Amherst. on April 26 at 2 p.m. Performances by Minuteman Marching Band Fall Color Guard members and Featured Twirlers. Tickets available at the door. Please bring canned goods for the Amherst Survival Center.
***The Talcott Mountain Music Festival, the outdoor concert series by the Hartford Symphony Orchestra, at Simsbury Meadows in Simsbury, CT, has put single tickets on sale. The series launches on June 27. Programs include: Midsummer Mozart (June 27) with HSO Conductor Carolyn Kuan; “Celebrate America” (July 3) with fireworks; “Broadway Rocks! (July 11) with music from “Wicked”, “The Lion King”, and “Hairspray” with Broadway actors Morgan James, Capathia Jenkins, and Rob Evan; “The Music of The Who” with Brody Dolyniuk (July 18), and a musical tribute to Ella Fitzgerald and Louis Armstrong (July 25). All concerts have rain dates. http://www.hartfordsymphony.org
Mark G. Auerbach studied theatre at American University and the Yale School of Drama. He’s worked for arts organizations and reported on theatre for newspapers and radio.