Author Seeks Tanglewood Picnic Photos for Book
Local author Gina Hyams is creating a book titled “The Tanglewood Picnic: Music and Outdoor Feasts in the Berkshires”. Scheduled for publication in summer 2015, the gift book will celebrate the tradition of lavish picnics held on the Lawn during concerts at Boston Symphony Orchestra’s summer campus in Lenox.
Hyams seeks photos of Tanglewood picnics, favorite picnic recipes, outdoor dining tips, and related picnic ephemera (such as invitations and menus) from all eras of the festival’s eight-decade history. Submissions of multiple images are welcome. She is particularly interested to hear from people who have made a beloved tradition of picnicking on the Lawn.
The deadline to submit images is September 30, 2014. Submissions will be considered for both print publication and posting on the project’s blog. Email submissions to: [email protected]
According to Hyams, “Due to print quality restrictions, only high-resolution images can be considered for inclusion (300dpi+ — either scanned or photographed with an iPhone or digital camera)”.
Hyams asks people to caption their submissions with date, occasion, names of people in the image, types of foods pictured, the name of the photographer, and estate to credit as necessary. Submissions should also include: name, address, and phone number. Hyams asks people to answer this question: What do you love about Tanglewood picnics? 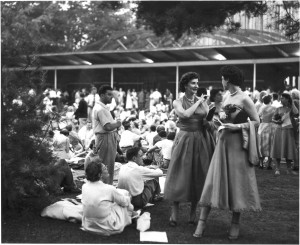 Gina Hyams is a Berkshire-based writer and editor who specializes in food, travel, and the arts. She has published eleven books, among them “Country Living Decorating with White” (Hearst), ”In a Mexican Garden: Courtyards, Pools, and Open-Air Living Rooms” (Chronicle Books), and “Pie Contest in a Box: Everything You Need to Host a Pie Contest”. (Andrews McMeel Publishing). For more information: www.ginahyams.com or http://TanglewoodPicnicBook.tumblr.com/.
UConn to Offer Online Arts Administration Graduate Program
The University of Connecticut will offer a new online graduate certificate in Arts Administration beginning in August, 2014. Arts Administration is new program within the Drama Department of the School of Fine Arts, and the certificate is being offered through UConn’s eCampus.
Successful completion of the certificate requires completion of four courses offered during the coming academic year: Managing Financial Information in Arts Organizations; Governance and Leadership for the Arts; Fund Raising and Development for the Arts; and Audience Management and Marketing the Arts.
The certificate is being offered through UConn’s eCampus. More information on eCampus can be found at http://ecampus.uconn.edu/. 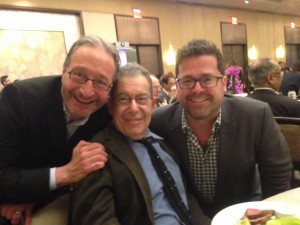 Nicholas Martin: RIP
Nicholas Martin, former artistic director of The Williamstown Theatre Festival, and before that, Huntington Theatre in Boston, died on April 30 at age 76. Martin frequently directed the comedies of Christopher Durang, and, last season, he staged the Tony-winning Broadway production of “Vanya and Sonia and Masha and Spike” , the Chekhov-flavored comedy of tortured relationships and frustrated dreams in rural Pennsylvania. The show ran on Broadway for over a year, and productions are upcoming at Hartford Stage and Shakespeare and Company. Broadway dimmed marquee lights in Martin’s memory on May 2.
Awards Season Update
“The Bridges of Madison County”, the new Broadway musical by Tony Award® and Pulitzer Prize-winning team Jason Robert Brown and Marsha Norman, starring Kelli O’Hara, and Steven Pasquale, plays its final performance on Sunday, May 18, after having played 137 performances. The musical had a pre-Broadway performance run at Williamstown Theatre Festival last summer.
“The Bridges of Madison County” was nominated for two Outer Critic Circle Awards, nine Drama Desk Awards including Best New Musical, and four Tony Awards including Best Actress (Kelli O’Hara), Best Original Score (Jason Robert Brown), Best Orchestrations (Jason Robert Brown), and Best Lighting Design of a Musical (Donald Holder).
Mark G. Auerbach studied theatre at American University and the Yale School of Drama. He’s worked for arts organizations and reported on theatre for newspapers and radio.