Happy 450th to The Bard
It’s William Shakespeare’s 450th Birthday, and Shakespeare and Company celebrates the Bard in a season of Shakespearean comedy, drama, and other tales. “Shakespeare’s Will” kicks off the summer season (5/23/14-8/24/14). The one-actor play by Canadian playwright Vern Thiessen imagines the bold and unapologetic journey of Shakespeare’s enigmatic wife, Anne Hathaway, and the couple’s unconventional courtship and marriage. Daniela Varon directs, and Kristin Wold stars.
“An exploration of Anne Hathaway’s mind and heart, “Shakespeare’s Will” illuminates an unexplored aspect of Shakespeare’s world, giving voice to the woman who spent 34 years married to a genius she rarely saw; a genius who notoriously bequeathed her his “second-best bed.” “Shakespeare’s Will is not a biography: it is an irreverent and imaginative journey of conjecture, filled with poetry, wit and song”, says director Varon. 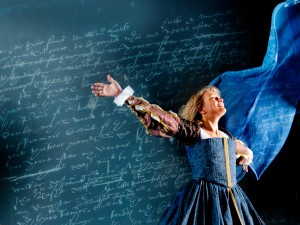 Kristin Wold in “Shakespeare’s Will” at Shakespeare and Company. (Photo by Kevin Sprague)

Kristin Wold is familiar to regular Shakespeare and Company audiences. She has been seen in their productions of “King Lear”, “The Tempest” and “Sea Marks”. Former StageWest audiences may remember her during her 1987-89 stint at the downtown Springfield theatre, where she appeared in “Visions of an Ancient Dreamer”, “A Funny Thing Happened on the Way to the Forum”, and “Six Impossible Things Before Breakfast”.
For tickets: 413-637-3353 or www.shakespeare.org.
One Singular Sensation!
“A Chorus Line”, one of Broadway’s biggest hits, opens the Connecticut Repertory Theatre’s summer season at The Harriet S. Jorgensen Theatre on the UConn campus in Storrs, CT June 5-14. With music by Marvin Hamlisch, lyrics by Edward Kleban, a book by James Kirkwood and Nicholas Dante, and conceptrion, direction, and choreography by Michael Bennett, “A Chorus Line” is deservedly one of the best musicals in the Broadway canon.
For anyone who ever auditioned for a play or an orchestra or band, or who tried out for an athletic team, or who interviewed for a job, “A Chorus Line” hits close to home. A group of dancers audition for the chorus of a new Broadway show; in the course of the performance, some are eliminated immediately, and some make the first cut. The director learns about their lives, and ultimately makes his difficult choices. 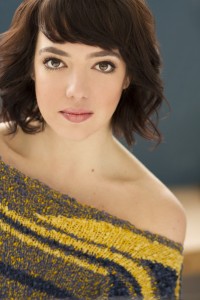 Lori Anne Ferreri is featured as Cassie in “A Chorus Line” at Connecticut Repertory Theatre.

“A Chorus Line” won the Pulitzer Prize and 9 Tony Awards, enjoyed a long Broadway run, toured internationally, was made into a less-successful film, revived on Broadway in 2006, was the subject of a documentary, and continues to thrille audiences.
Cassie Abate stages “A Chorus Line” in Storrs, and David Williams is Music Director. They’re both responsible for last year’s high-spirited production of “The Music Man”.
For tickets: 860-486-2113 or www.crt.uconn.edu.
Noteworthy:
Darko Tresnjak, Artistic Director of Hartford Stage, won an Outer Critics Circle Award for “Outstanding Director of a Musical” for “A Gentleman’s Guide to Love and Morder” (which won “Outstanding Musical”). The musical played its pre-Broadway run at Hartford Stage.
Keep in Mind…
***The Hartford Symphony Pops end their Bushnell season with a program, “Do You Hear The People Sing ?” on May 31 at The Bushnell. Music director Carolyn Kuan conducts the Symphony and the Hartford Chorale in a program of music by Broadway composers Alain Boublil and Claude-Michel Schonberg, best known for “Les Misérables”, “Miss Saigon”, “Martin Guerre”, and “The Pirate Queen”. Then, The Hartford Symphony moves on to Talcott Mountain for a dazzling Summer Pops line-up. For tickets (and Talcott Mountain information): 860-244-2999 or www.hartfordsymphony.org.
Mark G. Auerbach studied theatre at American University and the Yale School of Drama. He’s worked for arts organizations and reported on theatre for newspapers and radio.