Home For The Holidays
West Springfield’s Majestic Theater brings some of the Pioneer Valley’s best performers together for “Home For The Holidays”, its fifth annual seasonal variety show, “Home For The Holidays,” (December 17-23). The revue, reminiscent of the Perry Como and Andy Williams holiday TV specials, is hosted by Ray Guillemette, Jr., best known for his “A Ray of Elvis” musical tributes to Elvis Presley. Joining Ray onstage will be veteran Majestic performers including Ben Ashley, Luis Manzi, Amy Rist, Sue Dzuira, Brad Shepard (the radio host), Lori Efford and Don Clements. The show is directed by Cate Damon, with music direction by Mitch Chakour. Band members include Alex Chakour, Tim Hosmer (from Westfield), Elizabeth Conmisso and Don Rovero. For tickets: 413-747-7797 or www.majestictheater.com. 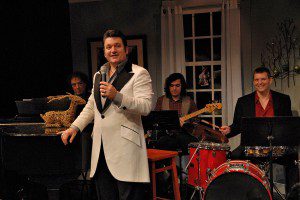 Out front and center in the white jacket is host of “Home for the Holidays” Ray Guillemette, Jr. Behind him, left to right, are band members Mitch Chakour, Alex Chakour and Westfield resident Tim Hosmer. (Photo by Rick Teller.)

Shop At Your Arts Groups
When you buy gift cards and tickets from a local non-profit arts group, it’s a win-win. Your gift recipient gets a great night of entertainment, and you support an arts organization. We checked around, and most arts groups offer gift certificates or gift cards. Gift card and certificates are always preferable, because your recipient can choose to see what they want to see. Some ticket purchases, particularly if you’re buying Broadway tickets, are non-exchangeable and non-refundable. All of the following sell gift certificates or cards at their box-offices.
The Berkshire Theatre Group offers gift certificates in any denomination to all of their theatres. They can be purchased via phone at 413-997-4444 or online at https://tickets.thecolonialtheatre.org/TheatreManager/1/online. The 2014 season as not as yet been announced.
The Bushnell offers gift cards with any denomination, which can be purchased via phone (860-987-5900) or online (www.bushnell.org). Paul Marte, the theatre’s public relations director, recommends tickets to“The Book of Mormon” (March 18-30), the Hartford theatre season’s most anticipated show, or “Beauty and The Beast” (May 6-11) for kids. The current Broadway hit, “Peter and The Starcatcher”, plays Hartford on February 18-23. A complete listing of all events is available at www.bushnell.org 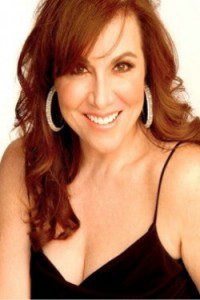 The Chester Theatre, which celebrates its 25th anniversary next year, offers fixed gift certificate options: $30/single ticket to any 2014 performance; $60.00 for a pair of tickets to any 2014 performance, or $100/4-play subscription ticket. All are available by phone (413-354-7771) or online. http://chestertheatre.org/give-the-gift-of-ctc-with-2014-season-holiday-gift-certificates/: All orders received by December 13 will be mailed by December 16. Spokesperson Todd Trebour says they’re still working on the details of the 2014 season, “BUT it IS going to be our 25th anniversary season so you can bet we are pulling out all the stops on programming”.
Goodspeed Musicals offer gift certificates in any denomination, according to spokesperson Elisa Hale, who shared that the 2014 season includes “Damn Yankees” (The Red Sox version), “Fiddler on the Roof” and the new Irving Berlin musical “Holiday Inn”. Order them at the box-office, by telephone (860-873-8668) or online (www.goodspeed.org).
Hartford Symphony Orchestra offer gift certificates in any denomination, available at the box-office (100 Pearl Street, Hartford), and via phone. (860-244-2999). Spokesperson Katie Bonner Russo says that the Orchestra’s website (www.hartfordsymphony.org) has a list of all upcoming programs. She also recommended using the tickets for the Hatford Symphony’s Talcott Mountain Music Festival, a summer outdoor concert series in Simsbury, or an upcoming performance of “West Side Story” (February 13-16 at The Bushnell).
Shakespeare & Company offers Gift cards available in $25 to $500 increments, which can be redeemed for any production in 2014. Visit their box-office at 70 Kemble Street, Lenox, order by phone at 413-637-3353 or online. http://www.shakespeare.org/planning-your-visit/tickets/shakespeare-company-cards/. They haven’t announced their 2014 season yet, but Noel Coward’s sophisticated comedy “Private Lives” is on tap from February 14 to March 30.
Springfield Symphony Orchestra offers gift certificates in any denomination, in person at their box-office, 1350 Main Street, Springfield or via phone: 413-733-2291. You can check program information on their newly revamped website: www.springfieldsymphony.org. The certificiates are good for classical and pops concerts. They’ve got two upcoming concerts that are likely to be hot tickets: Kevin Rhodes, the SSO’s energetic Maestro, conducting the Dvorak “New World Symphony” (January 25), and the red hot Broadway star Debbie Gravitte, whose brassy voice (think Merman), is featured on a program of music written for the James Bond movies, “Bond & Beyond” (March 1).
The UMASS Fine Arts Center offers gift certificates in all denominations which can be ordered by phone at 413-545-2511 or 800-999-UMAS. Marketing director Shawn Farley says $80 will cover a pair of tickets to most events, although the musical “American Idiot” and Pat Metheny have higher prices. “Green Day fans will love “American Idiot” says Farley, “and the season also includes Pat Metheny and Kenny Garrett for jazz fans; Christopher O’Riley and Matt Haimovitz for classical music lovers, and Alonzo King Lines Ballet for dance fans.” The Fine Art Season calendar is on their website: https://fac.umass.edu/Online/.
Mark G. Auerbach studied theatre at American University and the Yale School of Drama. He’s worked for arts organizations and reported on theatre for newspapers and radio.