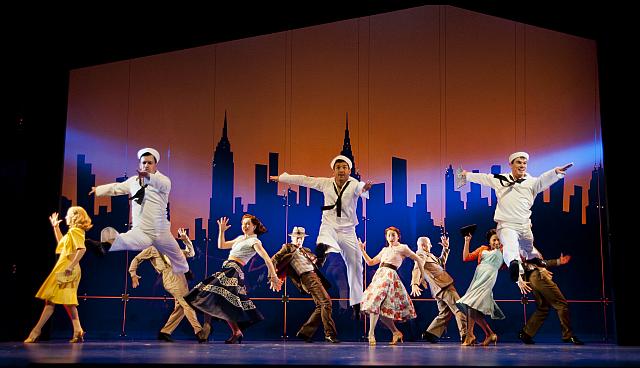 It’s Broadway Bound for “On The Town”
Barrington Stage’s 2013 production of the Leonard Bernstein / Betty Comden / Adolph Green/ Jerome Robbins musical “On The Town”, won rave reviews from audiences and just about every theatre critic who saw it, including the New York Times.
I couldn’t find enough words of praise when I wrote my review for The Westfield News, which began “To put it simply, ‘On The Town’ is one of the snappiest, jazziest, fun-filled musical comedies to play on an area theatre stage in recent years.” 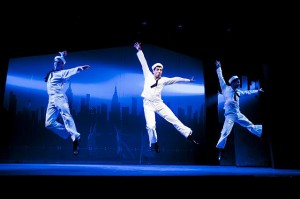 Jay Armstrong Johnson, Tony Yazbeck, and Clyde Alves as the three sailors on leave in “On The Town”. (Photo by Kevin Sprague)

So, the production is now previewing on Broadway before opening on October 16. John Rando directs; Joshua Bergasse choreographs, and almost all of the Barrington Stage cast went to Broadway, except for one or two, who had prior commitments. Joining Tony Yazbeck, Jay Armstrong Johnson and Clyde Alves as the three sailors on 24-hour leave in a 1940’s Big Apple are Elizabeth Staney, Alysha Umphress and Megan Fairchild as the women they meet in Manhattan. The very, very funny comedienne Jackie Hoffman has joined the Broadway company. 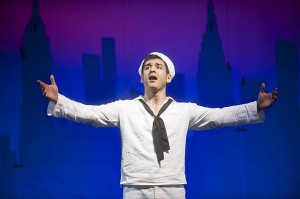 Tony Yazbeck in “On The Town”. (Photo by Kevin Sprague)

“On The Town” isn’t the first western Massachusetts production to move to New York City. In 2004, Barrington Stage developed and premiered William Finn and Rachel Sheinkin’s musical “The 25th Annual Putnam County Spelling Bee”, which took Broadway by storm in 2005, capturing two Tony Awards, three Drama Desk Awards and numerous other awards. Last season, Broadway saw Williamstown’s “The Bridges of Madison County” (and another production, “The Elephant Man” with Bradley Cooper) is Broadway-bound this season. But, “On The Town”, for its choreography, Leonard Bernstein’s jazzy score, and some great perfomances, ought to be one of Broadway’s hot tickets.
For tickets: http://www.onthetownbroadway.com/ 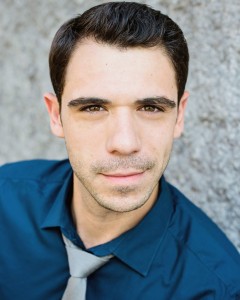 New Work at UConn: Olives and Blood
Connecticut Repertory Theatre (CRT) opens their 2014-15 season on the Storrs campus with a new play, “Olives and Blood” (October 2-12), written by UConn theatre professor Michael Bradford. Gary M. English directs.
“Olives and Blood” tells the story of Juan Luis Trescante (played by Martín Solá), an aging fascist who is called before a judiciary tribunal to testify about his involvement in the murder of Spanish poet-playwright Federico Garcia Lorca (played by Nicholas Urda) . Moving in time and space between the 1930s and 1970s, Bradford explores the last days of the talented poet, and the political and social motivations that attempted to silence his voice.
“Olives and Blood” was first produced in New York City at HERE in 2012. It received its British premiere in the fall of 2013 in London at Brixton East. 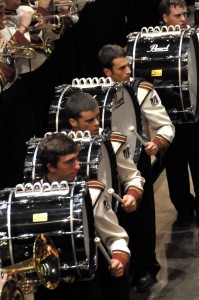 CRT Artistic Director Vincent J. Cardinal says “We are excited to bring Michael Bradford’s “Olives and Blood” to the stage. Producing and nurturing new work is a vital investment in the future of theatre. As a university-affiliated theatre, our students especially benefit from the process and creative energy required in bringing new work to life with a living playwright in the room.”
For tickets: 860-486-2113 or www.crt.uconn.edu
Of Note
Todd Rosenthal, Longmeadow native turned Tony Award-winning scenic designer, has another Broadway hit, “This Is Our Youth”, which opened to good reviews for the play, production, performances, and Rosenthal’s sets. http://thisisouryouthbroadway.com/
Keep in Mind…
***Poe. David Adkins stars as macabre poet Edgar Allen Poe in a new Berkshire Theatre Group production (October 2-26), written and directed by Eric Hill, former director of Springfield’s StageWest. Poe was a master teller of masterful and haunting stories, a perfect segue into the Halloween season. “Poe” performsin the Unicorn Theatre on the group’s Stockbridge campus. For tickets: 413-997-4444 or www.berkshiretheatregroup.org.
***Character Man. Jim Brochu, best known as the actor who captured the essence of Zero Mostel in his one-person show “Zero Hour”, plays “Character Man” in a musical celebrating the golden age of the Broadway musical, as sung by the character actors who highlighted the era. Sprinkled with juicy backstage lore, the show spotlights Mostel, Jack Gilford, Charles Nelson Riley, and Jackie Gleason. A hit in New York, “Character Man” plays Barrington Stage in Pittsfield through September 28. For tickets: 413-236-8888 or www.barringtonstageco.org.
***From Here to Eternity, Tim Rice’s Broadway-bound musical version of the movie, where things get steamy between a platoon sergeant and his captain’s wife. Currently the rage of the London Stage, “From Here To Eternity” gets a “live from London” screening in many cinemas on October 2, 5, and 9. Fathrom Events and Omniverse Vision produce the event at the Enfield 12 movie theatre in Conn., Hampshire Mall 15 in Hadley and the West Springfield 15. For details: http://www.fromheretoeternitythemusical.com/
***The 40th Annual Multiband Pops showcase concert, presented by the UMass/Amherst Department o Music and Dance is always a blockbuster. This year’s milestone concert (October 2) at the UMass Fine Arts Center Concert Hall, features fifteen wind, string, jazz, vocal, percussion and dance ensembles. The Minuteman Marching Band comprises nearly the entire second half of the show, after the intermission. For tickets call 413-545-2511.
Mark G. Auerbach studied theatre at American University and the Yale School of Drama. He’s worked for arts organizations and reported on theatre for newspapers and radio.