My “Best of 2013”
I’d taken an hiatus from arts reporting, so it was a thrill to return to the arts beat and have the opportunity to attend many performances. In picking “The Best of the Year”, I realize that it would be impossible to list everything, so my “Best” is essentially a recap of what moved me while attending a theatre performance.
Best Productions
***”On the Town” at Barrington Stage. Thank you, Barrington Stage, for giving new life to “On The Town”, one of the snappiest, jazziest, fun-filled musical comedies to play on an area theatre stage in recent years. Director John Rando and choreographer Joshua Bergasse (best known for his work on TV’s “Smash”) turned Broadway upside down earlier this season with their work on the Encores revival of “It’s a Bird, It’s a Plane, It’s Superman”. “On the Town” exceeded that production with taut, stylish direction and exuberant dance numbers (from lush, lyrical ballets, to a sizzling “Conga”). Add to that some first-class performances from Tony Yazbeck, Deanna Doyle, Elizabeth Stanley, Jay Armstrong Johnson and Alysha Umphress and ensemble alike–you’ve got a Broadway-quality production with great satisfaction value ! (Rumors abound that this production will resurface on Broadway in 2014. If it does, run for tickets!) 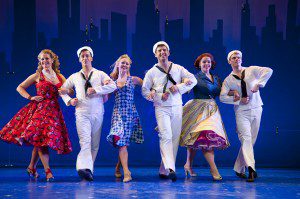 ***”The Most Happy Fella” at Goodspeed Musicals. This production of Frank Loesser’s “The Most Happy Fella” was a rich, buoyant evening of musical theatre at its finest. A compelling story, adapted from Sidney Howard’s “They Knew What They Wanted”, was infused with a mix of Loesser’s Broadway and pop standards, soaring operatic solos and duets, and dance music that had more than one pair of toes tapping in the audience. Rob Ruggiero’s staging brought out the fine points in material that overflows in excellence. All of the performances were terrific. Bill Nolte’s “Tony” was magnificently sung, and he commanded the stage with emotion and musicality. Mamie Parris was a winning “Rosabella”. Doug Carpenter’s “Joe” was richly sung and powerfully acted. Natalie Hill and Kevin Vortmann were great comic sidekicks who give the high-stepping “Big D” its showstopper quality. A trio of chefs, Martin Sola, Greg Roderick, and Daniel Berryman performed the difficult “Abbodanza” with high spirits. A different production of “The Most Happy Fella” will be part of Encores’ upcoming New York season with Shuler Hensley and Laura Benanti in the cast. It’s on my “must-see” list. 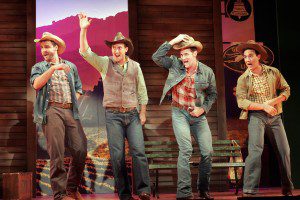 “Standing On the Corner” Eric Ulloa, Danny Lindgren, Kevin Vortmann, and Noah Aberlin are watching all the girls go by…in “The Most Happy Fella”, at the Goodspeed Opera House. (Photo by Diane Sobolewski.)

Best Performances
***Jeff McCarthy in “Southern Comfort” at Barrington Stage. The Barrington Stage Company presented the musicalization of Kate Davis’ award-winning Sundance Film Festival documentary about Robert Eads, a transgender man (born female) who was shunned by the medical community in Georgia, after being diagnosed with ovarian cancer. Annette O’Toole shined as the confident Eads, who brought together a group of other transgendered (and non) into his home. Jeff McCathy played “Lola”, Eads’ male-to-female transgender girlfriend. Lola was in the beginning stages of transition, and McCarthy, a tall, matinee-idol man with a booming voice (well suited to “Sweeney Todd”, a role he previously played in Pittsfield), was able to mine all of the insecurities of a troubled soul in transition. From uneasy moments in self-acceptance to a dance at a ball, where Lola is swept away in the moment, McCarthy triumphed in the nuance and suggestiveness of the moment. This was a larger-than-life performance played for intimate detail, which was the true heart and soul of the production.
***Rebecca Brooksher in “Anna Christie”, Berkshire Theatre Group. It took a while for Rebecca Brooksher as Anna to bring on the fireworks in the title role. The challenge of “Anna Christie” is moving beyond the performance of Greta Garbo in the film version, and the words of Eugene O’Neill require a balanced performance. It’s easy to be swept away by O’Neill’s drama and a true challenge to hold one’s own amongst equal or better talent sharing the stage. The up-and-coming actress, with a slew of credentials at Berkshire Theatre Group, Barrington Stage, and Chester Theatre Company,was dynamic in the second act, when she stepped in between her arguing father and boyfriend. I’d never read “Anna Christie”, but I recall seeing the production on Broadway with Natasha Richardson and Liam Neeson, an over-abundance of solid classical acting. I liked Brooksher’s interpretation in the only performance of hers that I’ve seen to date. She has a contemporary edge. I’d like to see her in a more contemporary work.
Best Surprises
***The Music Man. Connecticut Repertory Theatre. I never expected myself to be swept away by a musical theatre chestnut, given a dazzling production on a summer night. “The Music Man”, most-often remembered for the movie version, is an ageless show when in the right hands onstage. The Connecticut Repertory Theatre production was a serious crowdpleaser. Cassie Abate’s staging was just dandy, and the large cast of adults and kids performed with the zest of a Macy’s Thanksgiving Parade. Barrett Foa of “NCIS: Los Angeles” was an innocent-looking yet very crafty Harold Hill. He sold me on his smooth tones combined with smooth moves. Courtney Balan as “Marian, the Librarian” made a nice transition from a shrill, buttoned-up object of Hill’s interest into a warm and romantic partner of Hill’s. I loved the barbershop quartet of Joey Barreiro, Alex Gibson, Adam Maggio, and Temar Underwood, who made “Lida Rose” one of the show’s stand-outs. Steven Hayes (from the YouTube TV series hit “Steve Hayes: Tired Old Queen at The Movies”) as the pompous town mayor; and Lynn McNutt as his wife, Eulalie, and Mary Cadorette as Marian’s mom all shined. The entire cast looked like they were having the greatest time performing, and their exuberance was totally infectious. I had the greatest time watching them.
***Mary & Edith: “Roman Fever” at Berkshire Theatre Group. The Berkshire Theatre Group presented a double-bill of works by two Berkshires women, classic writer Edith Wharton and contemporary humorist Mary Mott. The Wharton piece, “Roman Fever”, for me, was 35 minutes of riveting theatre. Skillfully adapted from a novella by Eric Hill, and well-directed by Keira Naughton, it’s the story of two women, friends since childhood, who visit Rome with their unmarried daughters. There’s a twist at the end, somewhat a surprise to bring this mannered playlet to a dramatic finish. For me, it was one performance that made this a stunning evening. Kate Maguire, actor turned CEO of the Berkshire Theatre Group, and Kim Taylor, former Boston Symphony marketing director-turned actor, played the two women. Tara Franklin was a delightful narrator. Nut, Kate Maguire, made a most welcome return to the stage in this production. It was almost impossible to focus anywhere but Maguire, whose rich voice and subtle inflections and thoughtful movement defined a difficult character. Simply put, she was fabulous. 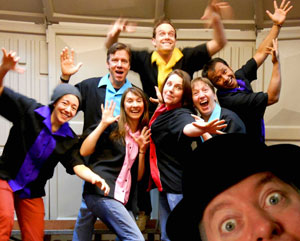 Keep in Mind…
First Night Northampton
For the 29th consecutive year, The Northampton Center for the Arts hosts the 12-consecutive hours, family-friendly First Night Northampton, with performances and exhibits at multiple venues throughout Northampton, MA. At midnight, the ball rises high above the Hotel Northampton. The events range from high-brow to low-brow, with many area favorites in on the acts, including the [email protected] Chorus, The Nields, Evelyn Harris, The O-Tones, Valley Light Opera, and more. According to Penny Burke, event producer, there are some Westfield folks in the performances, including: the Westfield group Strike A Chord! (First Church of Christ, Scientist), Paul Kochanski of Fancy Trash (The Elevens). and Blandford’s Zoe Darrow (First Churches Sanctuary). One First Night Button covers all the events, but buy them early, because prices increase on New Year’s Eve. For event details: http://www.firstnightnorthampton.org/
Mark G. Auerbach studied theatre at American University and the Yale School of Drama. He’s worked for arts organizations and reported on theatre for newspapers and radio.