Wardrobe Malfunction
Hartford Stage rings in the New Year with the Steve Martin (yes, *that* Steve Martin) adaptation of Carl Sternheim’s 1910 German comedy “Die Hose” (“The Underpants”) through February 9. A co-production of Long Wharf Theatre and Hartford Stage, “The Underpants” had a smash hit run in New Haven this fall, winning accolades from critics and audiences alike. Long Wharf’s Artistic Director Gordon Edelstein stages the farce.
A very public wardrobe malfunction sets the farce spinning (it wasn’t referred to as a wardrobe malfunction back then). At a parade honoring a king, a woman (the wife of a government officer) accidentally drops her bloomers. Martin infuses the comedy with ribald good humor, sexual innuendo, and verbal jousting with a contemporary edge. 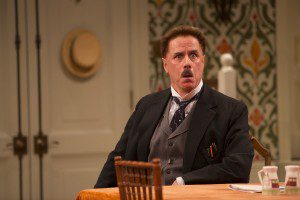 Jeff McCarthy in “The Underpants” at Hartford Stage. (Photo by T. Charles Erickson.)

The cast of “The Underpants” includes Didi Conn, best known as “Frenchy” in the movie “Grease”; Burke Moses from Broadway’s “Beauty and The Beast”, and Jeff McCarthy from Broadway’s “Chicago”, “Side Show” and “Urinetown”. Area audiences know McCarthy from his performances at Pittsfield’s Barrington Stage, starring in “Sweeney Todd” and “Southern Comfort” (his performance as “Lola” was one of my “Best of 2013” picks). Also in the cast are: George Bartenieff; Jenny Leona (“Little Murders”), and Steve Routman (“Pipe Dream” at, Encores!).
Steve Martin is the award-winning comic (“A Wild and Crazy Guy”), actor (“The Jerk”, “Parenthood”, “Dirty Rotten Scoundrels”), Oscars host, and banjo player. He wrote “Picasso at the Lapin Agile” for the stage, before writing “The Underpants”, which made its New York debut in 2002. 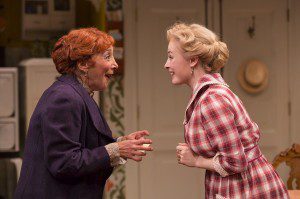 Didi Conn and Jenny Leona in “The Underpants” at Hartford Stage. (Photo by T. Charles Erickson.)

Martin wrote, in the introduction to his play, “Sternheim’s play is ribald, self-referential, and quirky. I hope I have retained those elements and assured my place in heaven – I mean, served the playwright’s intentions.”
For tickets: 860-527-5151 or www.hatfordstage.org
Bold New World
Two monumental works of Antonin Dvorak, his “New World Symphony”, and his Cello Concerto, fill Symphony Hall, when the Springfield Symphony Orchestra with Maestro Kevin Rhodes on the podium, perform these masterpieces on January 25. Cellist Nina Kotova is guest soloist.
Russian-born cellist Nina Kotova studied at the Moscow Conservatory and Musikhochschule in Cologne, Germany, giving her first performance as a soloist with orchestra at age 11. She made her Western debut in Prague with the Prague Radio
Orchestra in 1986 after winning the Prague International Competition, and followed with debuts at Wigmore Hall, the Barbican Centre in London, Carnegie Hall in New York and the Concertgebouw in Amsterdam. As a composer Nina Kotova has written numerous works for cello and orchestra. Her first Cello Concerto premiered in San Francisco in 2000. most acclaimed for her performances and recording of the Dvorak Cello Concerto. 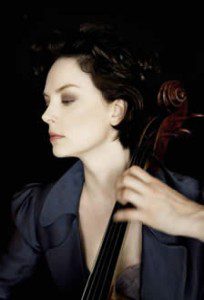 According to Rhodes, just back in town from his Lincoln Center debut conducting New York City Ballet’s “The Nutcracker”, “We are excited beyond belief for the SSO debut of Russian American cellist Nina Kotova! She is an electrifying performer as can be seen and heard from her recordings and YouTube performances. Moreover, she is also an accomplished composer. Her artistic presence combined with the indescribable beauty of the Dvorak Cello Concerto PLUS his ever-popular New World Symphony, make this program an explosive way to start the new year…it’ll be like being shot out of a cannon…in a good way!!”
Tickets: 413-733-2291 or www.springfieldsymphony.org
Keep in Mind…
***“Spank ! Harder”, the sequel to “Spank ! The Fifty Shades Parody” launches a national tour at Springfield’s City Stage (January 32-25). Based on the bestselling novels “Fifty Shades of Grey”, the parodies poke fun at pop culture delivering, according to the press materials, “a night of naughty and hilarious fun to women in over 150 cities”. “Spank ! Harder” plays The Hanover Theatre in Worcester on February 7 andThe Colonial Theatre in Pittsfield on February 8. For tickets to the Springfield performances: 413-788-7033 or http://www.citystage.symphonyhall.com/. For tickets to the Pittsfield performance: 413-997-4444 or www.berkshiretheatregroup.org. For tickets to the Worcester performance: 877-571-SHOW or http://thehanovertheatre.org
Mark G. Auerbach studied theatre at American University and the Yale School of Drama. He’s worked for arts organizations and reported on theatre for newspapers and radio.