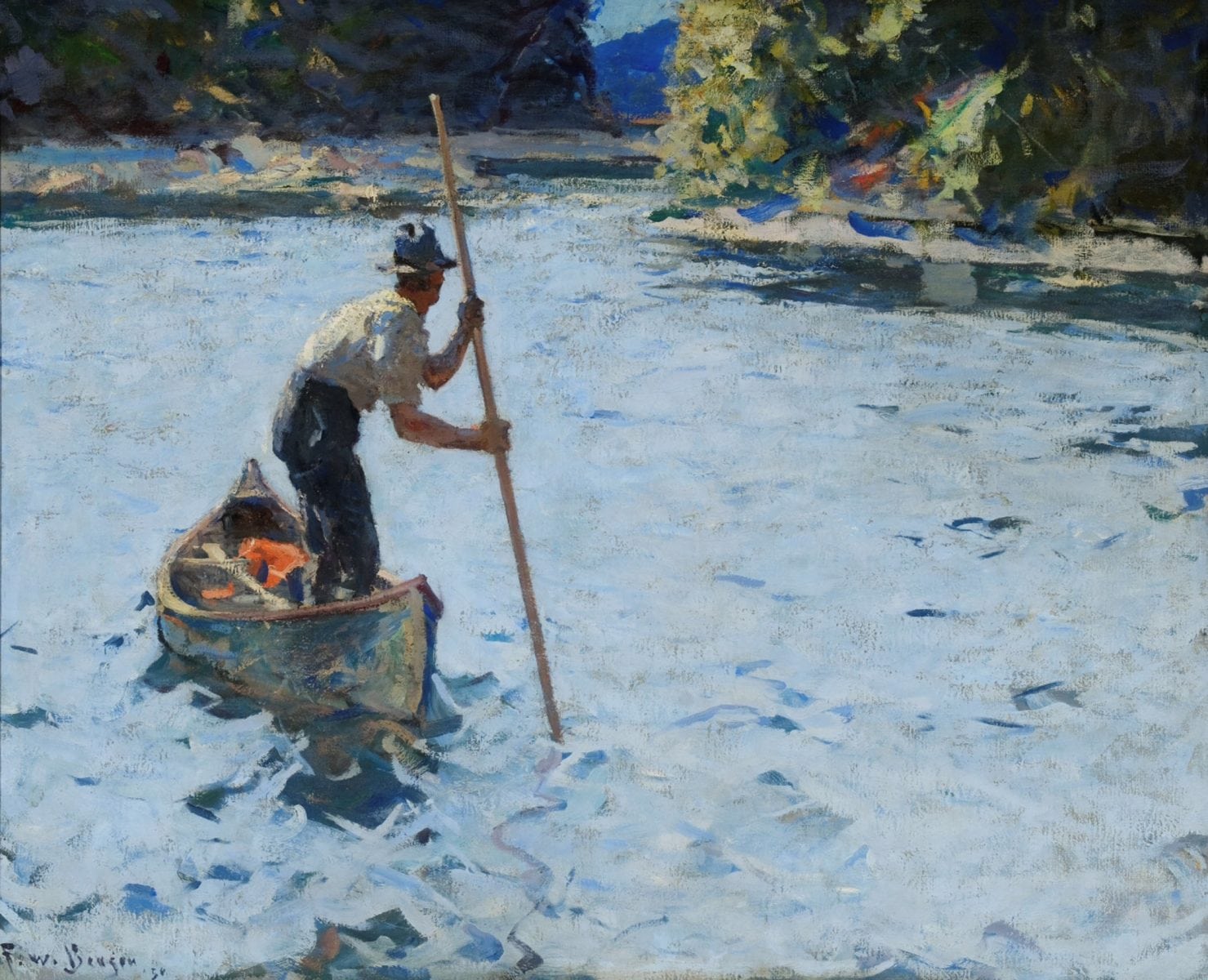 Major American Impressionist Works at Springfield Museums
Impressionism, the radical style that dominated the French art world in the late 19th century, took root in America thanks in large part to the emergence of the art colony movement. Excellent examples from artist colonies like Cos Cob CT, Shinnecock, NY, Taos, NM, and Provincetown, MA will be on display in a new exhibit at the Springfield Museums (July 14-October 25).
More than 100 works dating from the golden age of American Impressionism, the 1880s through the 1940s, will be exhibited. Featured artists include Mary Cassatt and John Singer Sargent, expatriate artists working in Paris alongside the Impressionist greats Degas and Monet, along with American masters like William Merritt Chase and Charles Webster Hawthorne who embraced the style and helped further its development in the United States. The exhibit also includes other leading Impressionist artists such as Childe Hassam, Ernest Lawson, Julian Alden Weir, John Twachtman, Chauncey Ryder, Frank W. Benson, William Paxton, Abbott Thayer, Guy Wiggins, Colin Campbell Cooper, Daniel Garber and Edward Redfield, among others.
A companion exhibit, Provincetown Artist Colony: Woodblock Prints is also on display through January 10. For details: http://www.springfieldmuseums.org/
Bells are Ringing in Pittsfield
The late duo of Betty Comden and Adolph Green had a 60-year partnership, which produced some stunning musicals, including this season’s Broadway hits On The Town and On The Twentieth Century. Their beloved adaptation of Peter Pan just finished a run at Connecticut Repertory Theatre. Bells are Ringing, their collaboration with Jule Styne to showcase the musical comedy skills of Judy Holliday, plays Pittsfield’s Colonial Theatre (July 9-26) under the auspices of The Berkshire Theatre Group.
Bells are Ringing, which features the now pop standards “The Party’s Over”, “Just in Time”, and “Long Before I Knew You” was the big Broadway hit of 1956 (and a later film hit with Holliday and Dean Martin). It’s set in a long-forgotten era, before text messages, instant messaging, cellphones, email, and high tech. Ella (Kate Baldwin) runs an answering service, where she interacts with her clients.
Ethan Heard stages the musical with the two leads from last season’s A Little Night Music, Broadway stars Kate Baldwin and Graham Rowat (who played the married Count and Countess). They’re married in real life.
For tickets: 413-997-4444 or www.berkshiretheatregroup.org.
Spotlight: Ryan Winkles
Western Massachusetts draws major talent to its resident base. Case in point: Ryan Winkles, the actor currently starring in Shakespeare & Company’s Henry V (through August 23). Winkles is celebrating his 10th season in Lenox with Shakespeare & Company. His credits there are quite diverse: It’s A Wonderful Life, Twelfth Night, The Mystery of Irma Vep, Mother Courage, Othello, and A Midsummer Night’s Dream to name a few. He lives near the theatre with his wife Kelly Galvin, who also appears in Henry V. This spring, Winkles choreographed the fight sequences for Barrington Stage’s Man of La Mancha, took part in WAM’s Fresh Takes Series production of Tall Girls, and in between, commutes to Boston. He and Galvin set up an apartment there while she studies directing and he teaches trapeze. Trapeze..?
Trapeze! Winkles came to theatre via the circus. He studied circus arts at Florida State University, and made his way into theatre. Since, he’s juggled circus arts, theatre, and fight choreography, which has been acclaimed in productions like Barrington Stage’s Sweeney Todd, Guys and Dolls, The Game, and recent productions at WAM.
Winkles loves the Berkshires. “There’s no place better in season with Jacob’s Pillow, Tanglewood, Barrington Stage, Shakespeare & Company, or Berkshire Theatre Group, and Pittsfield’s coming up with new hotels, restaurants, and all. And, it’s a beautiful area, where you can just sit at a lake with a book”.
There’s little time for lakesidie reading right now for Winkles. Henry V, Shakespeare’s drama about the absurdity of war, has Winkles in the title role onstage most of the show. “It’s a cast of eight–me and seven others playing a variety of roles”, says Winkles. “It’s an exhausting experience, bold, adventurous, energetic.”.
For tickets to see Winkles in Henry V: 413-637-3353 or www.shakespeare.org.
Keep in Mind…
Xanadu, the wacky musical based on the Olivia Newton-John cult classic film of the same name is next at Connecticut Repertory Theatre in Storrs, CT (July 9-19). Vincent J. Cardinal directs, and the cast includes Broadway veteran Dirk Lumbard, Amandina Altomare and Luke Hamilton (from last season’s Gypsy), and comic Steve Hayes (Tired Old Queen at The Movies). For tickets: 860-486-2113 or www. crt.uconn.edu
Yidstock: The Festival of New Yiddish Music launches its fourth season July 16-19 at the Yiddish Book Center in Amherst, MA. The four-day festival, which features both legendary performers and exciting up-and-coming artists in klezmer and Yiddish music, kicks off with a performance by the Grammy Award-winning Klezmatics, leaders in the klezmer revival on July 17. The festival also includes a full schedule of talks and music and dance workshops. More information can be found at www.yiddishbookcenter.org/events/yidstock.
The Little Foxes, Lillian Hellman’s classic portrait of a ruthless Southern family steeped in scandal and innuendo, is staged by Ed Golden for Northampton’s New Century Theatre. For details: 413-585-3220 or www.newcenturytheatre.org.
Mark G. Auerbach studied theatre at American University and the Yale School of Drama. He’s worked for arts organizations and reported on theatre for newspapers and radio.