Tis The Season for…
Sugar Plums, Waltzing Flowers. It’s “Nutcracker” Time
“The Nutcracker” has become wildly popular holiday fare among American dance companies. When it premiered in St. Petersburg, Russia, in 1892, it wasn’t a hit, but the Tchaikovsky score was. In 1944, the San Francisco Ballet produced a “Nutcracker”, which turned the ballet into one of the most important full-length classics. George Balanchine staged his version for New York City Ballet in 1954, and the rest is history.
For “Nutcracker” novices, the ballet is inspired by E.T.A. Hoffmann’s “The Nutcracker and the Mouse King”, and it’s basically a fantasy, where a young girl receives a toy nutcracker at a Christmas party. She later dreams that she is whisked off to the Kingdom of the Sweets by a Sugar Plum Fairy and her cavalier, via battling mice and soldiers, whirling snows, and waltzing flowers and dancing candies. “The Nutcracker” is dazzling costumes and special effects, and in the right hands, a major theatre experience. 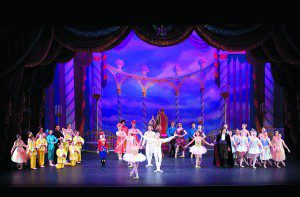 If you really want to go first class–great Balanchine choreography, sets, performances, and live music, catch the New York City Ballet performances at Lincoln Center through January 4. Springfield Symphony Maestro Kevin Rhodes from Westfield conducts the orchestra on December 26 at 2 p.m.; December 27 at 8 p.m., and December 29 at 1 p.m. (http://www.nycballet.com).
If New York is too far for ballet, the Boston Ballet also offers up a great production through December 29 at the Opera House. (http://www.bostonballet.org/nutcracker)
Locally, several regional companies offer their versions, all based on the original Petipa one that became an American classic.
The Albany Berkshire Ballet, founded in 1960 by Madeline Cantarella Culpo, peforms “The Nutcracker” on December 7-8 at The Colonial Theatre in Pittsfield, and on December 14 at Springfield Symphony Hall. Local children are a part of each cast. For Pittsfield tickets: 413-997-4444. http://www.berkshiretheatregroup.org/ and for Springfield tickets: 413-788-7033. http://www.symphonyhall.com/ 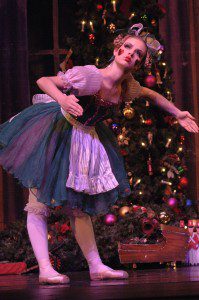 The Nutmeg Ballet of Torrington, Conn. performs double matinees at The Bushnell in Hartford on December 7-8. Eleanor D’Antouno, the beloved principal dancer at American Ballet Theatre, has provided some of the choreography, and the mysterious Drosselmeyer is played by European stage actor Thomas Evertz. For tickets: 860-987-5900 or www.nutmegballet.org/performances/nutcracker.
It’s A Wonderful Life: A Live Radio Play
Shakespeare & Company presents It’s a Wonderful Life: A Live Radio Play (December 6-29) at its Lenox, MA campus.Inspired by Frank Capra’s classic 1946 film starring Donna Reed and James Stewart, Adapted by Joe Landry, and filled with just the right hint of nostalgia and charm, director Jenna Ware brings audiences back to the Golden Age of Radio with this poignant, funny and unique play-within-a-play. Set in a radio studio on a snowy Christmas Eve in 1946, five radio personalities are live, on-air, retelling the American Christmas classic, “It’s a Wonderful Life,” before a studio audience. The five actors will play not only the show’s radio actors, but in true “Lux Radio Theatre” fashion, will play all 50 roles from It’s a Wonderful Life. The show will also include radio jingles, live sound effects and favorite Christmas songs. For tickets: (413) 637-3353 or www.shakespeare.org.
Newsmakers… 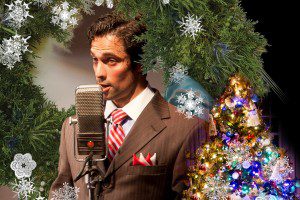 Keep in Mind…
***Home For the Follidays, the annual Springfield Symphony Holiday Pops on Saturday, December 7 at Springfield Symphony Hall. Kevin Rhodes conducts the orchestra, the Springfield Symphony Chorus and the Children’s Chorus of Springfield. Special guest stars include the Tap Dancing Santas. You know the music, so join in and sing along. Theres also a silent auction at the peformance. Tickets: 413-733-2291 or www.springfieldsymphony.org
***Christmas at The Colonial. Mary Verdi and special guests Bobby Sweet and Ron Ramsey ring in the holiday season (November 30-December 1) at Pittsfield’s Colonial Theatre with a program of holiday favorites featuring A Children’s Chorus, Dalton Ballet, Berkshire Music School Violins, St. Ann Children’s Chorus, Berkshire Pulse Drum Core, Neighborhood Gang, and of course, Santa! Verdi performs selections from her “Christmas in the Berkshires CD”. For tickets: 413-997-4444 or www.berkshiretheatregroup.org.
***It’s a Horrible Life ! The Gold Dust Orphans, the Boston-based eccentric theatre troupe, direct from its triumphant New York debut of “Mildred Fierce”,(with drag star Varla Jean Merman in the Joan Crawford part), bring their zany take-off of Frank Capra’s “It’s a Wonderful Life” to Boston (December 5-22). This very adult and risque parody (definitely not for the kids) set in Bedbug Falls, comes from the theatre group that brought Boston and Provincetown hits like “All About Christmas Eve”, “Phantom of the Oprah”, and “Pornoccio”. Performances at Machine on 1254 Boylston Street. For tickets: http://www.brownpapertickets.com/event/508879
Mark G. Auerbach studied theatre at American University and the Yale School of Drama. He’s worked for arts organizations and reported on theatre for newspapers and radio.