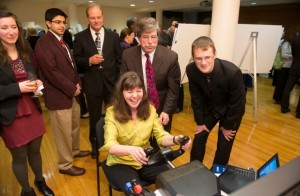 NASA’s Astronaut Cady Coleman piloting a Cessna 172, using a flight simulator as others gather around and watch her fly at a recent WSU gala. (Photos submitted)

WESTFIELD – On May 17th, NASA’s most senior active astronaut, Cady Coleman, will be coming to Amelia Park Children’s Museum to speak and share stories about her adventures. The lecture is free with a general admission ticket to the museum.
Along with sharing inspirational stories and answers questions from all ages about space and her adventures, there will be a number of activities for kids to participate in. They will be focused around space and science.
Coleman started her missions as a graduate from UMass Amherst with a doctorate in polymer science and engineering while she was a member of the Air Force ROTC program. After graduating, she joined the Air Force as a second lieutenant.
NASA then selected her in 1992 to join the NASA Astronaut Corps and she has been an active member ever since. Spending over 180 days in space, she is more than qualified to speak to younger generations about space and the missions she has been on.
Coleman has spent most of her time in space aboard the Space Shuttle Columbia and International Space Station logging almost 4,500 hours on them combined. She has done experiments in space focusing on materials science, biotechnology, combustion science, the physics of fluid, and was the lead specialist for the deployment of the Chandra X-Ray Observatory.
Coleman is such a renowned and respected astronaut that when the filming of the 2013 movie, Gravity, was going on, lead actress, Sandra Bullock, reached out to Coleman for advice. Coleman was on the International Space Station at the time, so they contacted from Earth to space.
Anybody interested in our solar system, outer space, biochemistry, or being an astronaut should take advantage of the opportunity to hear her speak at Amelia Park Children’s Museum.
For more information on the lecture, please contact Amelia Park Children’s Museum at (413)-572-4014.