WESTFIELD – With the game tied at one and Pittsfield having runners on the corners with no outs in the top of the fifth inning, a double steal, followed by a wild throw to home plate, allowed Pittsfield to take the lead. Jake Paris then grounded out to second base to score Jack Lee and extend the lead to 3-1.

Pittsfield would hang onto their advantage and defeat Westfield 5-1 in a pool play game for the 14-Year-Old All-Star Division of the Babe Ruth Western Massachusetts State Tournament.

“I think it was a closer game than the score indicates,” said Westfield head coach Mike Tirrell. “We played that game real tight the entire time.”

In the top of the seventh inning, Pittsfield was able to add two insurance runs. Lee scored off a wild throw and then Jake Risley hit a double to plate another run.

Down 1-0 in the bottom of the second, Westfield was able to tie the contest up. With runners on second and third, Fred Murray grounded out to shortstop to score Joey Dekarski.

Throughout the rest of the game, the team from the Whip City continued to generate runners on base, but the offense was never able to produce the timely hits they desperately needed.

“We just couldn’t get the key hit when we needed to,” said Tirrell.

Even when Westfield was able to get in scoring position, the Pittsfield defense executed all the right plays, including a wildly impressive triple play turned by Pittsfield shortstop Anton Lazits, when Westfield had runners on first and second with no outs. 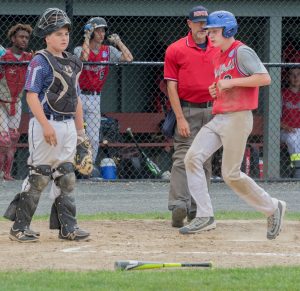 Westfield’s Joey Dekarski scored to tie up the game at one apiece in the bottom of the second inning. (Photo courtesy of Lynn Boscher)

The triple play was almost seen as an impossible play to make, but Tirrell is aware that those kinds of things occur in baseball.

“There’s no way he’s (the base runner) getting back at second,” said Tirrell. “Stuff like that happens.”

The good thing moving forward for Westfield is the fact that the chance to redeem themselves will be presented rather quickly. Westfield plays Blackstone Valley on Sunday at 3 p.m. at Bullens Field.

Pittsfield is scheduled to play a makeup game with Blackstone Valley on either Sunday or Monday, as that exact day and time hasn’t been announced yet.