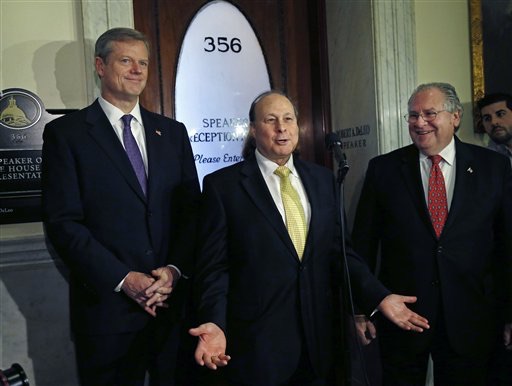 PHILIP MARCELO, Associated Press
BOSTON (AP) — Following private meetings at the State House yesterday morning, Republican Gov.-elect Charlie Baker and Democratic legislative leaders pledged to work together to address the state’s most pressing issues, despite their political differences.
House and Senate leaders praised Baker as ready to hit the ground running on fiscal and other issues, citing his role as a former cabinet official in two governor’s administrations. Baker served as secretary of Health and Human Services and later secretary of Administration and Finance under Republican Govs. William Weld and Paul Cellucci in the 1990s.
“I expect it will be a very smooth beginning. We may disagree at times but we will do so without being disagreeable,” said Senate Majority Leader Stanley Rosenberg, an Amherst Democrat expected to become senate president next year. “We’ll find common ground, build solutions, so that the people of the Commonwealth have the government they elected and that they deserve.”
Baker said his first priorities remain building a transition team and preparing to unveil his first state budget, which is due about six weeks from when he takes office in January.
“That, for me, is going to be the first opportunity to make a statement about where we are and where we are going,” Baker said of his budget proposal. “I’m well aware that the House and the Senate will have their own views on that.”
The governor-elect and legislative leaders said they did not discuss a $325 million deficit the state faces in the current year, noting that outgoing Gov. Deval Patrick has promised to propose solutions before he leaves office.
Baker and House Speaker Robert DeLeo said they would be reluctant to use the state’s rainy day fund to plug the gap, a move that the Patrick administration says it’s trying to avoid. The state budget totals about $36.5 billion.
“It’s a bad signal,” Baker said. “You’re creating an automatic gap with respect to what you have to do next year.”
Baker has been meeting political leaders in the overwhelmingly Democratic state since his narrow victory over state Attorney General Martha Coakley on Nov. 4. Last week, he met with Patrick and visited politicians and business leaders in western and central Massachusetts. He also met with Republican leaders in the legislature Monday.