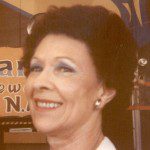 WESTFIELD – Barbara M. Cavanaugh, 88, died peacefully with her family by her side on January 1st 2013 at Baystate Medical Center. Barbara was born on March 29, 1924 to Gladys (Webster) Blanchette and William Blanchette late of Westfield.
Barbara attended school in Russell, MA as a young girl and then attended Westfield Public Schools, graduating from Westfield High School in the class of 1941. She worked all throughout high school to help her family during the depression and after graduation went to work for the Telephone Company. She sadly fielded many calls from the families of the “Boys and Girls” of WWII that she was in school with and remembered them, where they were stationed, and their families for all of her life. She never forgot them or their families.
Barbara was the beloved wife of the late Lt. James H. Cavanaugh of the Westfield Police Department for 59 years, who died in 2001. Barbara leaves her daughter, Jeanna Cavanaugh of Springfield, her daughter, Betsy Cavanaugh of Westfield, and the Light of her Life her grandson, William W. Cavanaugh of the WNEU Police Department, the WNEU Law School and recently appointed to the Westfield Police Department Reserve Force, following in his grandfather’s and uncle’s footsteps. She loved them all dearly. Barbara also leaves a special sister-in-law, Christine Michonski and her husband Joe and family; her brother-in-law, William Cavanaugh who recently gave the family a very special moment, and his family; sister-in-law, Jeanne Jablonski and family; her faithful niece, Dina Meader husband Rick and daughter Hannah; a special cousin, Joanne Bovat and husband Ron and many nieces and nephews on both sides, all of whom she was proud of and loved to hear about. She also leaves her lifelong friends, Helen Salois, Kay Murphy, Barbara Hill, bridesmaid “Peg” Moran, and the Griffin and Gunn families. Barbara suffered a sad year in 2012 losing her “sister-in-life” Margaret Gunn, her dear friend Jane Maroney and her dear friend and neighbor of 56 years, Valida Adams. Barbara was predeceased by her infant brother, William; her brother, Norman Blanchette, also of the Westfield PD and his dear wife Alice Dickinson Blanchette, a true daughter to Barbara’s parents; her sister, Norma Teece, and her brothers-in-law, Francis, Joseph and John Cavanaugh.
Barbara was a descendant of the Mayflower and a member of the Daughters of the American Revolution, Gen. William Shepard Chapter. Barbara revered her country, her home and her family. She was of the Greatest Generation. The family wishes the thank Dr. Robert McGovern, Allergist, who cared for her and about her for many years and Dr. Robert Hoffman who cared for her family. There are no words to thank the Doctors at the Baystate Medical Center, every one of whom were excellent and compassionate beyond anything we could have hoped for. We would like to thank the Westfield Police and Fire Departments for their wonderful help and kindness, when she needed them they were there. We would like to thank the many angels at Baystate Medical Center from “ALL DEPARTMENTS” who carried us through our ordeal.
Funeral services will be held on Monday, January 7, 2013 at 11:00 a.m. from the Firtion-Adams Funeral Service, 76 Broad Street, Westfield, MA followed by burial in Pine Hill Cemetery. Calling hours will be held on Sunday, January 6th from 4:00-8:00 p.m. from the funeral home.
firtionadams.