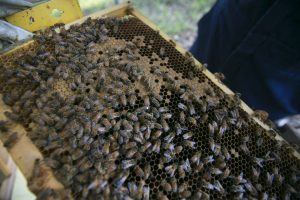 In this Tuesday, July 11, 2017 Associated Press file photo, the health of beehives are checked while keeping an eye on parasites to prevent blight from destroying the hives. (Santiago Flores/South Bend Tribune via AP)

There is much concern over the bee population in Western Mass, but there is much being done about it by our local beekeepers.

Westfield resident Bill Speery, owner of Bee Tree Acres, commented that a lot of the problems faced by bees in general is caused by agriculture.

The pesticides used by orchards to protect the crops are sometimes sprayed in places where bees also migrate.

Speery said that compromise between beekeepers and farmers can sometimes work out but usually requires spraying pesticides at near or far hours of the day.

Speery also said that there is very little concern about personal poison usage, such as spraying your home for pests, is still a fine choice and will do no real harm to the bee population.

Of the eleven diseases that can threaten honey bees, Varroa Mites are some of the deadliest across the globe. This parasite sucks the blood from both adult bees and broods. Doing this weakens the bees being born and often causes deformities. If left untreated, the entire colony can be wiped out.

Varroa Mites are a new problem for Beekeepers nationwide. They first came to America in 1988 from illegal trading in Florida with sellers from the Ukraine. By 1991, Varroa Mites were discovered in Kentucky, and soon the whole nation’s bees were infested.

Billy Crawford, owner of New England Apiaries, a Westfield resident and friend of Speery had much to say about the history of Varroa Mites and the methods used to protect bee colonies.

New England Apiaries is the largest in Western New England, with over one thousand colonies being raised.

“The number one reason [for colony deaths] is operator mismanagement.” Crawford said. He explained the process, known as an alcohol wash, used to tell how many mites are attached to a colony.

A sample of 100 bees are placed in a jar filled with alcohol. While this kills the bees inside, it reveals how many mites per-hundred is inside the colony. If the test shows four or more mites, then action is required.

The most difficult part is knowing that, at this point, there is no way to stop Varroa Mites from getting into the colony to begin with. Apiary owners can fumigate their nests in case of severe infestation, killing the mites while the bees stay healthy.

There are hundreds of bee hobbyists and licensed bee keepers who sell raw honey. Crawford says that people should “buy local, and support your local Apiaries” because what bees do is vital for the ecosystem and our way of life.