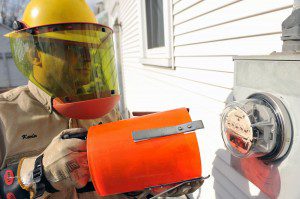 Utility companies across the country are replacing old-fashioned electric meters, a technology more than 100 years old, with digital “smart meters” which automatically send real-time usage information back to the company for monitoring and billing purposes.
Westfield Gas and Electric has jumped on the bandwagon, and will soon embark upon a three-year, $3.3 million project to replace its 19,000 electric meters in the city with new devices that deploy automated meter reading (AMR) technology. The new meters will eliminate the need for manual readings and ultimately help hold down costs for consumers, says Daniel Howard, general manager of the city-owned utility.
Even though the plan has raised few eyebrows in Westfield, certain types of smart meters are sparking a backlash nationwide among those who say the devices endanger health and violate privacy.
Opposition to the meters comes from those who say their health is damaged by electromagnetic fields, and from civil libertarians who believe they collect and disseminate too much personal information with inadequate oversight or data security.
In California, where Pacific Gas and Electric has installed more than seven million of the devices, protesters were arrested last summer while blocking smart meter installation trucks in Sonoma and Marin Counties. In Maine, smart meter opponents have taken their argument all the way to the Supreme Judicial Court. Connecticut’s attorney general last fall put a temporary halt on Connecticut Light and Power’s $863 million smart meter plan, and just weeks ago, Michigan’s Public Service Commission was ordered to resolve a number of consumer-related questions before the meters are installed there.
Bloomberg News reported last month that the consumer backlash against the new wireless digital technology is slowing U.S. utilities’ $29 billion effort to upgrade their networks.
Monterey resident Sandra Chianfoni is one such smart meter opponent. She says that the proliferation of electromagnetic radiation from cell phones, wireless internet, and other modern devices causes a type of low-frequency noise pollution that puts public health at risk.
“Never in the history of mankind have all living things been exposed to microwave radiation levels pulsing 24 hours a day non-stop and with no way to escape the biological interference,” says Chianfoni. “Considering the security breach this technology presents, interference it can cause to people with medical implants, along with false claims of energy savings; this technology adds no benefit to the consumer.”
Opponents on various online forums say the smart meters cause sleep problems, headaches, ringing in the ears, confusion or difficulty concentrating, fatigue, stress and agitation, heart palpitations, tingling sensations, and difficulty breathing.
Chianfoni is circulating a petition calling upon Attorney General Martha Coakley to let customers to “opt out” of smart meter programs in Massachusetts and keep their mechanical analog meters instead.
The organization Stop Smart Meters, a national clearinghouse for the movement, says the meters can even cause cancer by emitting radio-frequency (RF) microwave radiation “at a range of frequencies recently placed in the category ‘possible human carcinogen’ by the World Health Organization.”
“Big Brother” is at play as well, says the organization, which claims the meters give utility companies access to “a treasure trove of information about your electricity usage, potentially compromising your privacy.”
The Westfield News asked Howard if Westfield Gas and Electric had met much opposition to its smart meter plan, if these concerns are valid, and how the utility plans to address safety and privacy concerns moving forward.

“Things have been relatively quiet. But nevertheless, we took these concerns into serious consideration when we started planning our AMR technology,” Howard said in a telephone interview. “We gathered all sorts of white papers and research on the meters, and had them evaluated by a third-party scientist.”
The third-party evaluator was Dr. Rama Krishna Janaswami, professor of Electrical and Computer Engineering at the University of Massachusetts at Amherst. Janaswami is an expert in the electromagnetic characterization of communication systems.
“We even made sure he evaluated the position papers cited by those who oppose the meters,” said Howard. “We wanted to make sure we covered every base.”
Janaswami put it this way: if the power density of RF radiation from a typical residential smart meter at a distance of one foot equals one unit, then a cell phone at the ear emits 1,136 units, a microwave oven two inches from the door emits 568 units, and a Wi-Fi router at six feet emits 2.2 units.
The American-made Elster REX2 meters chosen by WG&E have a slightly higher gain than the typical meter, and emit nine units at one foot in front of the unit — but they only turn on for 1.5 seconds every four hours, making the radiation almost ten thousand times less than from a continually radiating source.
As such, any radiation from the meter is “orders of magnitude weaker than that from a cell phone, leakage from a microwave oven, and a cordless phone,” wrote Janaswami in his report, which is available for download on WG&E’s Web site.
“Several potential health concerns have been raised in the media over the use of smart meters,” wrote Janaswami. “Our investigation found that these health concerns are overblown and don’t seem to have a consensus in the scientific community.”
The technology chosen by Westfield Gas and Electric will have meters sending a short radio signal every four hours to collector units mounted on poles 25 feet from the ground. The collector units will gather data from as many as 750 homes and send the information back to WG&E headquarters using the company’s fiber optic cables.
So even looking at the hypothetical neighborhood of 750 homes, total RF emissions will equal 1/13 of a single continually radiating smart meter, wrote Janaswami.
The UMass scientist conceded that the jury’s out when it comes to cell phone use, writing that “we need to keep a close watch for a link between cell phones and cancer risk,” and that some credible studies pinpoint cordless phones as well. But bottom line, the smart meters don’t even come close to the impact of smart phones.
As for an American Academy of Environmental Medicine study that claims smart meters can damage genetic material — a study oft-cited by opponents — Jaraswami points out that no other scientists have been able to reproduce the results, and that one of the authors cited by the Academy has been unmasked as a fraud. The AAEM study is “amusing to read” but “highly speculative,” wrote Janaswami.

Howard said he had heard of the protests in California and across the country, but wanted to make one thing clear: the AMR technology that Westfield Gas and Electric is introducing does not reach into the home and gather data about appliance use.
“We’re taking the most simplistic approach to smart meters,” said Howard. “Yes; there’s two-way communication possible between the meter and WG&E. We can contact the meter if we need to; say, if it’s not working. But we’re not looking at the Home Area Network technology used by some of the bigger utilities that actually can gather that type of information.”
If the utility had been one of a few winners nationwide of a federal stimulus grant designed to roll out a comprehensive “smart grid,” the story might have been different.
In 2009, WG&E applied for an American Recovery and Reinvestment Act grant from the Department of Energy to help pay for $10 million in smart grid components, including the meters — and was turned down.
“That program required strict adherence to U.S. government guidelines,” said Howard. “It was about much more than reading meters.”
Under the Home Area Network or HAN system stipulated by the DOE grant, appliances in the home and the smart meter would actually “talk” to each other. Another requirement was a system of tiered pricing based upon whether electricity was being used during “peak load” times or not.
“The objective was to try to control time of use; to provide incentives to get people to use power during non-peak times,” he said. “That’s not what we’re doing here. We’re not using a dime of federal money. We have no want or need to intrude upon our customers.”
What’s more, the data transmitted from the meters is securely encrypted, he said.
As for the company’s privacy policy, it’s the same as it’s ever been, he said, and the company takes extensive measures to ensure the integrity of customers’ personal information.
When it comes time for the installation, customers will receive written notification about a week before work begins. A clearly identified WG&E technician will knock on the door before proceeding, but there’s no requirement that anyone be home. Customers will see a brief interruption of power, usually less than five minutes, and the entire upgrade should take less than 15 minutes, says the company’s Web site.
Despite the nationwide grassroots movement against smart meters, the city of Westfield has seen little resistance to the plan, said Howard. The Department of Public Utilities doesn’t require that utilities allow customers to keep their old meters, and WG&E has not received a single request to “opt out” of the program.
“We have looked at other utilities…and have found that numbers of requests for opting out are typically less than one percent of a utility’s customers,” said Howard, who added that those who do generally pass the cost on to those consumers at the cost of anywhere from $10-$25 per month.
As for the system-wide meter upgrade, “We owe it to our customers to be as efficient in our operations as possible.”
But anti-smart meter activist Chianfoni sees it another way.
“Sad to say that there is not much in the line of smart meter activism in Massachusetts,” she told the Westfield News. “It has been my focus to get more attention on this issue, but it is hard finding those who want to roll up their sleeves.”