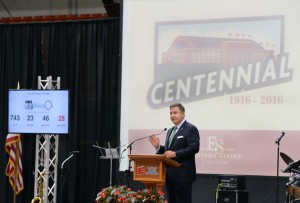 WEST SPRINGFIELD – The Eastern States Exposition hosted a Community Breakfast yesterday in the storied Coliseum to kick off the countdown to ESE’s 100th anniversary which will be celebrated in 2016. The event was the first of many events and activities the Exposition has planned for the next two years.
“The Exposition was chartered in 1914, when Joshua L. Brooks began his quest to showcase agriculture in the Northeast, and 2014 seemed a fitting year to begin our celebration, culminating with the 100th anniversary in 2016,” Eugene J. Cassidy, ESE president and CEO, said. 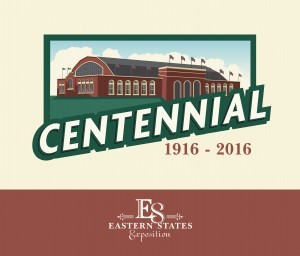 Cassidy, Chairman of the Board Donald R. Chase and West Springfield Mayor Edward C. Sullivan began the breakfast by officially starting the countdown clock and unveiling the organization’s new specially designed centennial anniversary logo. ESE Historian, Dennis Picard, director of Storrowton Village Museum, presented a pictorial program on the origin of Eastern States Exposition and the significance of founder Joshua L. Brooks.
Attendees were asked to fill out “Memory Cards” to share their fondest and earliest memories of the Exposition, some of which will be incorporated into an exhibit planned for the centennial celebration. All were also presented with a “Wooden Nickel” which will be good for free admission on Sept. 16, 2016 – opening day of the 100th Big E.
To keep current on all 100th anniversary events and celebrations, visit TheBigE.com, join our mailing list, connect with us on social media or share your memories by emailing [email protected]
This year’s Big E takes place September 12-28.