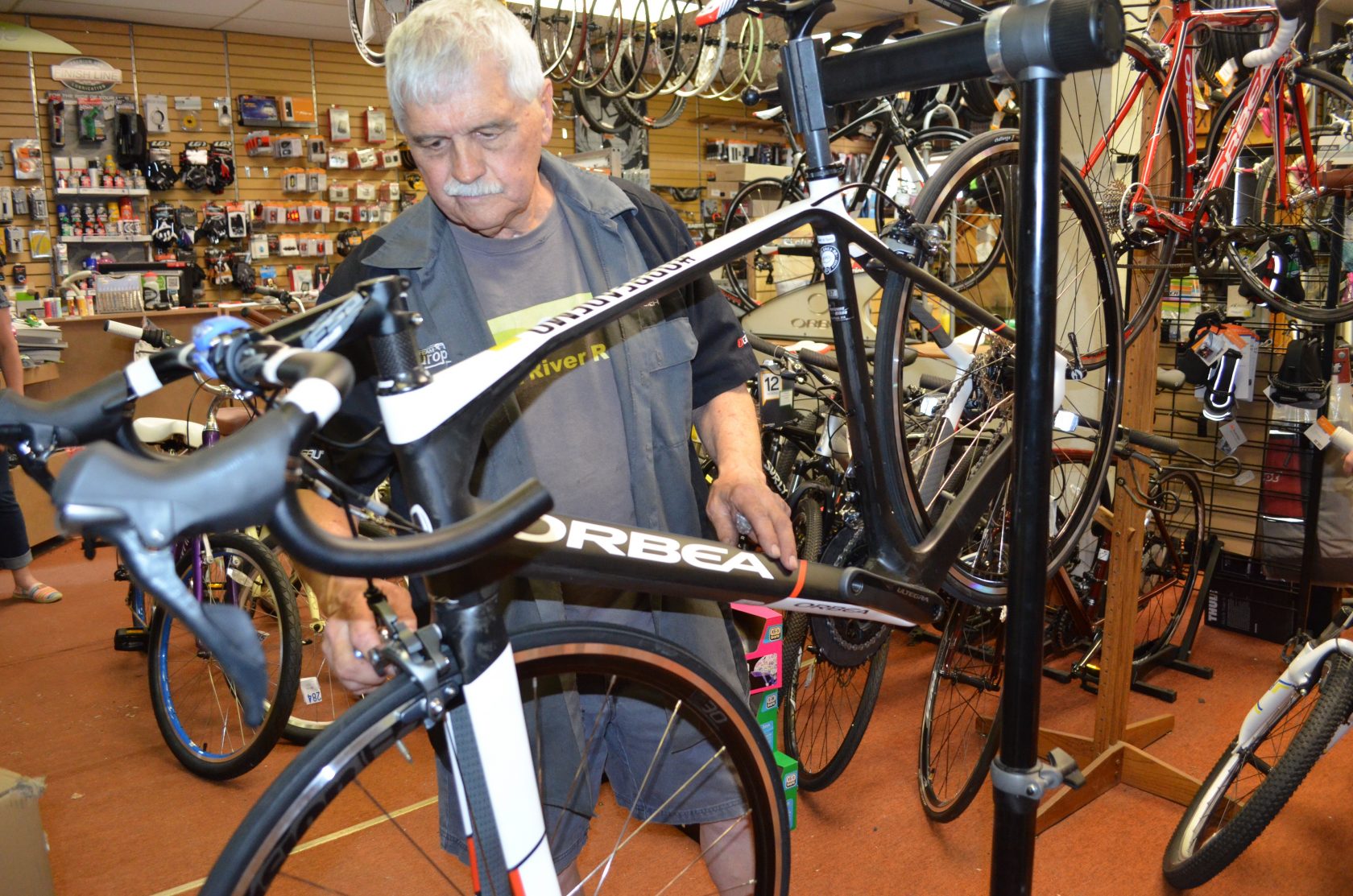 By LORI SZEPELAK
Correspondent
WESTFIELD – Don Podolski, known by many as the “face” of bicycling in the city for almost three decades, is once again energized as plans roll out for Bay State Bike Week which takes to the streets through May 17.
“We’re very fortunate in Massachusetts to have a bike-friendly government and bike-friendly Massachusetts Department of Transportation,” said Podolski.
Podolski, owner of New Horizons Bikes on Franklin Street, explained that Massachusetts is one of several states where cyclists have the right to use the full lane.
“Lane positioning in Massachusetts is determined by what the cyclist considers safe and drivers are required to slow down and pass at a safe distance,” he said.
This year marks the 16th anniversary of Bike Week in the Pioneer Valley, and Podolski is proud that the city has been an active participant in festivities since the beginning.
“We are proud that the state took our lead and now sponsors Bike Week across the state,” he said.
A Mayor’s Ride from City Hall kicks off Bike Week at 8:30 a.m. Monday, which includes highlights of current and future projects that impact bicycling. On Tuesday, a Slow Ride kicks off at 6 p.m. from Park Square. The 30- to 40-minute ride will encompass four miles and include core bicycling areas of the downtown. On Wednesday, a free breakfast for cyclists is planned from 6 to 10 a.m. in front of the Rinnova building at 105 Elm St. On Thursday, Podolski will lead a free maintenance clinic at New Horizons Bikes starting at 6:30 p.m.
“The clinic will review the basics of bike set up, flat tire repair, and safety checks on parts including gears,” he said.
At each event, bike safety trinkets will also be distributed including reflective arm/leg bands, bells, Blinkie lights, and reflective stickers for one’s bike or helmet.
“We also hope that area residents visit the free Bicycle Eclectic photo exhibit in the Rinnova building this month,” said Podolski, noting the exhibition from Adventure Cycling features 21 prints from cyclists who tell their stories of traveling around the country.
Jay Vinskey, principal planner for the city and chair of the Bicycle and Pedestrian Advisory Committee, also encourages area residents to participate in the festivities planned across the city and region.
“Bicycling is a great mode of transportation that is safe, economical, healthy, environmentally friendly, and fun,” he said. “The Columbia Greenway Rail Trail, as it progresses further into the downtown, will really change the access and vitality of downtown Westfield.”
Vinskey added that as more residents ride bikes, the perceptions, awareness and safety of this mode of transportation is likely to be enhanced.
Podolski echoed those sentiments.
“Health benefits far outweigh any risks,” said Podolski. “Bicycling is one of the safest modes of transportation and it is a very social activity.”
Vinskey also noted that during the May 6 meeting of the advisory committee, of which Podolski is also a member, the concept of a complete streets policy was endorsed and now advances to the Planning Board for review and suggestions.
“Complete streets are designed and operated to provide safety, comfort, and accessibility for all the users of our streets, trails, and transit systems, including pedestrians, bicyclists, transit riders, motorists, commercial vehicles, and emergency vehicles and for people of all ages, abilities and income levels,” said Podolski.
Complete streets also contribute toward the safety, health, economic viability, and quality of life in a community by improving the pedestrian and vehicular environments to provide safe, accessible, and comfortable means of travel between home, school, work, recreation and retail destinations, according to Podolski.
Vinskey also acknowledged Westfield State University Associate Professor Marijoan Bull of the Geography and Regional Planning Department, and several students who are wrapping up a land use audit which will assist the committee in future endeavors.
“Westfield State students and Professor Bull have gone far beyond the capacity of the committee or the city’s resources on its audit and outreach activities,” said Vinskey. The Westfield State report is expected to be completed and presented to the committee at the end of May.
Bay State Bike Week in the Pioneer Valley is a collaboration of the Pioneer Valley Planning Commission, the Massachusetts Department of Transportation, MassRides, and MassBike. Details about schedules, activities, events and locations are available at www.baystatebikeweek.org.