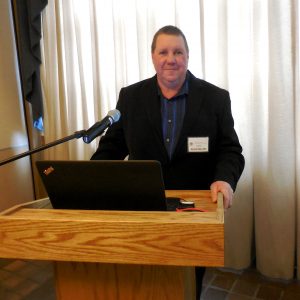 DPW director David Billips was the keynote speaker at the Westfield River Symposium on Saturday.

WESTFIELD – David Billips, director of Public Works for the City of Westfield, was the keynote speaker for the annual Westfield River Symposium on Saturday in Scanlon Hall at Westfield State University. Sponsored by the Westfield River Watershed Association, the symposium brings together speakers on topics related to the watershed.
Billips, who spoke about Impacts and Recovery from Acute Weather Patterns, said this was his third time speaking to the association. “He likes to share his knowledge,” said Joanna Williams, DPW secretary, who attended the event. Billips, who has a bachelor’s in chemical engineering from UMass, oversees 10 departments and an $18 million annual budget for the city.
Billips’ talk covered the June 1, 2011 tornado which damaged the Shaker Road water treatment plant and pumping station; Tropical Storm Irene on August 28, 2011, which brought 7 inches of rain, flooding the Granville Reservoir and Westfield River and causing a spillway collapse and flooding of the wastewater treatment plant; and the October, 29, 2011 snow storm which brought 18-24 inches of snow while the leaves were still on the trees, taking out power to the city for a week in some areas.
“We had some really bad weather,” Billips said. 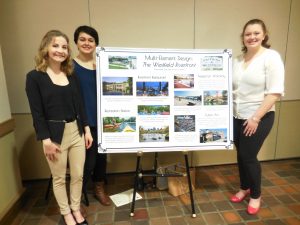 The tornado cost $400,000 in damage, Tropical Storm Irene $2.5 million, and the snow storm $250,000 plus an additional $890,000 for the city.
What did they learn? Billips, who was Water Resource Department superintendent at the time, said they learned to record everything. Joanna Williams, secretary of the department wrote everything down. The Highway Department did not, and lost $800,000 in reimbursements.
Billips said they also learned that their emergency procedures were solid. During the snowstorm, which he said caused the city the most problems; emergency generators ran for 3,800 hours at 29 locations.
He said they learned that the system was vulnerable and it was a good time to upgrade the Granville reservoir, which provides 40% of the city’s water, the main pipeline and water treatment plant. He said the pipeline capacity was decreasing and limiting the use of the plant, and it would be less expensive to replace under planned than emergency conditions.
Billips then talked about the 2013-2014 replacement of the raw water main which was over 100 years old, and ran through a narrow gorge. He said it was originally installed using mules and dynamite. This time, they used pipe bursting and trenching. Phase I was completed in 100 days, and funded by federal low interest SRF loans. 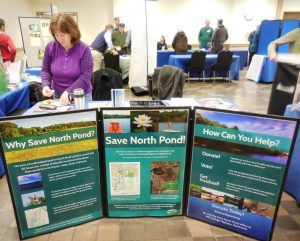 Mary Martin of Winding River with a Save the North Pond display.

Upgrades were also done to the 20-year-old water treatment plant. A “green energy” hydraulic turbine was installed in the basement of the plant, taking advantage of the water power rushing down the pipeline from the reservoir. Billips said that project is already paying for itself in savings.
“I’m amazed at where green energy has gone these days, what it could do, and how good it is for our planet,” Billips said.
He said the costs for the upgrades totaled $5.8 million, but with $1.6 million back from federal funding, ended up costing the city $4.2 million. He said the upgrades to the spillway, which included eliminating a turn, and the new pipeline will outlast “all of us.”
Billips ended his talk with the drought of the past year, referring to it as “Old Testament weather.” He said the combination of the hottest summer on record – 90 degrees for ten days, and an extreme lack of rainfall, 25 inches less over two years, caused “staggering results.” The city was forced to take two wells offline, and there was an impact on groundwater levels and water quality. Billips said they are measuring the aquifer now. He said the lower water use also decreased revenue, which is needed to operate. 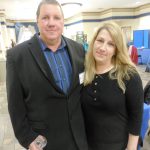 Also in attendance at the conference was Kim Billips, David’s wife, who has worked at the Wastewater Plant in Chicopee for the past 32 years, where they also met.
“It’s nice when you can still enjoy going to work,” Kim Billips said.
Other speakers at the symposium included Karl Leiker (WSU meteorologist), Nancy Bobskill (Zero Waste), Matt Colemann (US Army Corps of Engineers), and Chris Chamberland (Berkshire Design Group).
Upcoming events for the Westfield River Watershed Association include the Annual Watershed Cleanup on April 22, the annual meeting on May 18, and the Westfield River canoe crews on June 17. More information may be found on their website at www.westfieldriver.org.