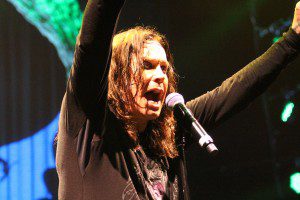 MONTVILLE, Conn – On the heels of their very first number one album in the United States, Black Sabbath conquered the sold out Mohegan Sun Arena on Thursday, August 8.
The band recently released a full length album of all new material, its first since 1978’s Never Say Die. The collaboration is the result of original members Ozzy Osbourne, Tony Iommi, and Geezer Butler. The original drummer, Bill Ward reportedly decided to step aside because of a contract dispute with the band.
On to the show…  Sabbath opened the concert with the classic War Pigs, which had everyone in the audience on their feet thankful the band put past issues aside to tour once again. From the opening notes of both Ozzy and the entire band, the sound was not overly loud and was very clean. Not straying from their first couple of releases, the band plowed through Into the Void, Under the Sun/Every Day Comes and Goes and Snowblind before they included a new song, Age of Reason. Age of Reason fit perfectly in this set and honestly would have fit just as well on anything they did in the early 1970’s. 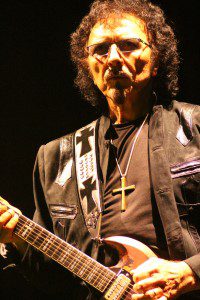 At one point, Ozzy announced their new album had gone to number 1 in the U.S. and followed that with a big “thank you”. Then going back to the very first album, the band used the rain and bells chiming intro to kick off the song Black Sabbath…  many of the crowd’s favorite song of the evening and the very first song I ever heard from this great band.
Behind the Wall of Sleep and N.I.B. came next and were soon followed by another new one, End of the Beginning before the band played another of the Sabbath classics, Fairies Wear Boots and Rat Salad. This lead to a Tommy Clufetos drum solo. Clufetos had previously drummed for Alice Cooper and Rob Zombie. Leaving Zombie to join with Ozzy for his solo record and tour. He is not only a perfect fit for the band musically, but also adds a youthful element as seen by his exaggerated rock star drum moves.
With only a handful of songs left to play, Sabbath pounded out Iron Man, God is Dead? (new), Dirty Women, and Children of the Grave, before finishing the night with the encore and the ultimate classic, Paranoid.
Black Sabbath has been putting out music and touring since 1970…  yes, that is right, 1970. We are talking over 40 years of music. A number of these songs were written in the early 70s and fall into that musical timeless space where only a handful of artists can say they have accomplished. If you are a fan and this band tours again…  go see them, who knows how long they can continue to perform at this level. I am a long time proud fan of Black Sabbath and as much as they sing about hell and the devil, this band is truly blessed to have endured a lifetime in Rawk and Roll.