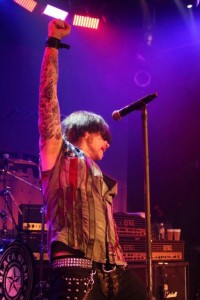 NEW HAVEN, Conn. – Black Star Riders was formed out of the ashes of the latest incarnation of the band Thin Lizzy. Instead of continuing under the Lizzy name, band members made a decision: new music and new name. Black Star Riders was born. The current line-up was formed in 2012 and released all new material in May of 2013 titled All Hell Breaks Loose. Their sound is very straight ahead rock and roll and very reminiscent of classic Thin Lizzy material.
On a recent night in New Haven at the infamous Toad’s Place, Black Star Riders flexed their musical muscles with a set that featured half Thin Lizzy material and the other half Black Star Riders material. Opening up the show with the title track off their new release, All Hell Breaks Loose, the band was ready for a night of rawk!
First Lizzy song of the night and the second song of the set was Are You Ready. For the first eight songs of the night the band alternated between Black Star material and Thin Lizzy material. This included Lizzy classics Bad Reputation, Jailbreak and Suicide. While the Black Star songs were Blood Shot, Before the War and Hoodoo Voodoo.
This is a band of professional that have been in the business for many years. Lead singer Ricky Warwick formed the band The Almighty and has also had a successful solo career.  Guitarist Damon Johnson was a member of the 1990s hard rawk band Brother Cane before settling in with Alice Cooper’s band for a number of years. Marco Mendoza has played bass with Blue Murder, Ted Nugent and Whitesnake. Mendoza was playing this night, but has since left the band to pursue other interests. Drummer Jimmy Degrasso has been in bands since the 1980s and has pounded the skins for the likes of Y&T, David Lee Roth, Ozzy, White Lion and Ratt… to name a few. Scott Gorham, the former lead guitarist of Thin Lizzy, and the true tie between the two bands, was who the crowd really came to see. Gorham didn’t disappoint, playing the leads on all the Thin Lizzy songs.
The rest of the set stayed mostly the same way as the band alternated Thin Lizzy and Black Star Riders songs. These included Lizzy classics Southbound, Emerald, Cowboy Song and The Boys are Back in Town. The Black Star songs were a perfect fit alongside the classic Lizzy tunes. Like Thin Lizzy and hailing from Ireland, singer Warwick does an amazing job with the Lizzy songs live.
A professional band playing some kick butt new music and covering classic Thin Lizzy material… what more could you want when seeing a rawk band live. Check out the Black Star Riders new release, All Hell Breaks Loose and then check them out live next time The Boys are Back in Town.