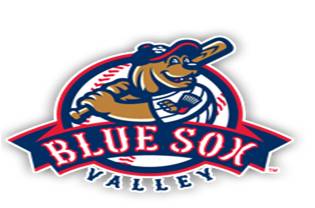 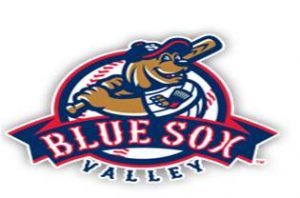 HOLYOKE – The Valley Blue Sox are just one win away from being crowned back-to-back NECBL Champions after defeating the Ocean State Waves 5-3 Wednesday night at Mackenzie Stadium.
It was a pitcher’s duel in the early innings as Blue Sox RHP Endy Morales (Southern New Hampshire University) and Waves RHP Michael Gutierrez (Felician College) dominated in the early going. The Blue Sox were the first to score in the championship series when Nate Cardy (Gannon University) sent a two RBI single to center field, putting the Blue Sox ahead quickly 2-0. Simon Whiteman (Yale University) and Benny Wanger (Yale University) each added RBIs to put the Blue Sox ahead 4-0 in the third inning.
The Ocean State Waves would answer with a solo home run by Grant English (Winthrop University). The Blue Sox would get that run right back and regain their four-run lead on an RBI single to left field by Jaylen Smith (Kennesaw State University).
After seven innings of work, Blue Sox starter Endy Morales exited the ball game. Morales went seven innings giving up four hits, one run, two walks and struck out seven Waves.
“He has been everything for a lot of reasons. He works hard, the guys love him, they play hard behind him. He has come such a long way in his three years with us and we cannot say enough about what he does,” said head coach John Raiola when asked about Endy’s meaning to his team.
The Waves would not go away easily as they got two runs in the eighth inning, when Casey Dana (Seton Hall University) and Garrett Hodges (Kennesaw State University) hit singles and collected RBIs, cutting the Blue Sox lead in half.
RHP Benny Wanger came in for the last 1.1 innings and shut the door on the Ocean State Waves striking out one and preserving the 5-3 victory for the Blue Sox.
“We made some nice plays at times, but we left some plays out there that if we make smooth team plays then that game is not as close as it was at the end. The guys did enough to win, and Endy was outstanding,” Raiola said.
With the victory, the Blue Sox are just one win away from winning back-to-back NECBL championships. The Blue Sox will travel to Ocean State Thursday and look to claim the 2018 NECBL Championship. If the Blue Sox are unable to capture the title Thursday, game three will be back at Mackenzie Stadium on Friday at 6:35. Tune in to all Blue Sox social medias @BlueSoxGameday on Twitter, and @ValleyBlueSox on Instagram, and Facebook for further updates regarding further playoff schedules. – Courtesy of Collin Quinn/Valley Blue Sox