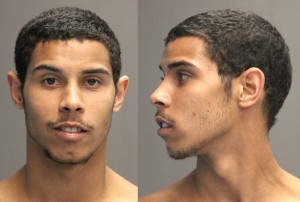 WESTFIELD – A watchful resident coupled with a prompt and knowledgeable police response resulted, within minutes, in the apprehension of three men who allegedly smashed their way into a convenience store to steal cigars and cigarettes.
A Montgomery Road resident called 911 a 1:16 a.m. yesterday to alert police that at least two people were then in the act of robbing J.J.’s Variety store.
The woman told an emergency dispatcher that she had seen two men smash the front window of the store across the street from her apartment and had seen one of the men go into the store while the second man went to the rear of the building.
Sgt. Michael Kane arrived within minutes along with officers Matthew Preuss, Frank Solimani and Efrain Luna and the officers found the front window of the store at 122 Montgomery had been smashed out. 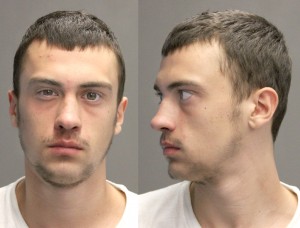 Officers established a perimeter around the store to contain anybody still inside but Luna was the one to hit pay dirt when he made a sweep of the area and spotted a vehicle that looked out-of-place less than five minutes after police first arrived at the crime scene.
Luna reports that the red 2000 Dodge Intrepid was parked at a Prospect Street address he is familiar with and he recognized that it did not belong there.
Luna approached the vehicle and spoke with the three occupants who initially told him they were there to drop off one of the passengers but, since Luna knew who lived at the address, he knew that to be a fabrication.
Luna reports that the suspects were generally evasive and offered no reasonable explanation of their presence in the area.
One of the occupants, who was wearing only a shirt, complained of the chill but officers noticed that there were a number of sweatshirts and hats in the car that nobody was wearing.
While officers were speaking with the suspects, a representative of the store arrived and reported that a large number of cigars and cigarettes had been stolen. 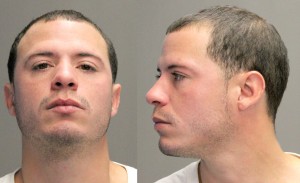 Officers were also able to review the store’s security video and saw that the clothing that the suspects were seen to be wearing on the video seemed to match the clothing in the car that nobody was wearing.
A subsequent search of the trunk of the car reveled items which appeared to match merchandise stolen from the store.
Sergio M. Cozzaglio, 20, of 6 St. Paul Street, Dominic James Giordano, 19, of 7 Owens Place, Holyoke, and Anthony W. Ramirez, 32, of 126 Union St., were each arrested on charges of breaking and entering a building in the nighttime with intent to commit a felony and larceny from a building.
Giordano was found to be the subject of an outstanding warrant and he was also arrested on the warrant.
All three were arraigned later in the day in Westfield District Court before Judge Philip A. Contant.
Cozzaglio was held in lieu of $250 cash bail and Ramirez was held in lieu of $500 cash bail. Giordano was released on $1,000 personal surety.
All three are due to return to court on Oct. 8.