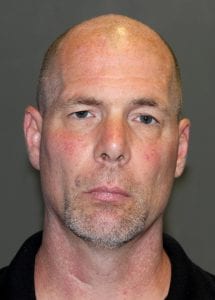 WESTFIELD – A city man is in jail after he allegedly broke into a neighbor’s home while the residents were sleeping to steal a television and a crockpot.
City police received a call Wednesday morning from a Green Avenue resident who reported that a brick had been thrown through a window sometime overnight and his television had been stolen while he was sleeping upstairs.
Det. Jason William reports in a court document that he responded to the call and found that two windows had been broken and that a large television and a crockpot were missing.
The crockpot was found under the deck of a nearby house and blood drops discovered on one of the broken windows were found to be the start of a trail of blood drops which led to a nearby house, the home of Michael R. Hiltbrand, 47, of 5 Greene Ave. who, Williams reports, “became the main suspect.”
Williams reports that, on Friday, Hiltbrand called the police dispatcher and said that “he would be coming in to the Westfield Police Department to turn himself in regarding a previous crime he had committed.”
When he “arrived at the station on his own free will,” Williams reports, Hiltbrand “confessed to breaking the windows on his neighbors house late Tuesday night. The Defendant also stated that he had stolen their television and crockpot.” Hiltbrand told Williams that he had sold the television for $50 and “used the proceeds to purchase Crack Cocaine.”
He appeared before Judge William O’Grady later Friday in Westfield District Court for arraignment on charges of breaking and entering a building in the nighttime with intent to commit a felony and larceny for a building.
O’Grady set bail at $1,000 pending an Aug. 7 hearing but, for Hiltbrand, bail was not immediately relevant because the charges potentially represent a violation of probation imposed as a result of previous charges.
In February, 2019, Hiltbrand had pleaded guilty to a charge of assault with a dangerous weapon stemming from an altercation with a motorist and had been placed on probation for a year.
He was held without right to bail Friday pending a violation of probation hearing scheduled for Aug. 7.