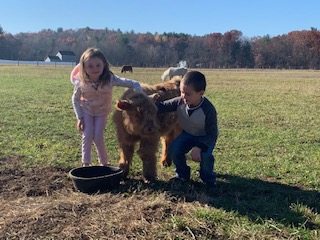 WESTFIELD-A year ago, Robin Plourde’s dream of owning an animal rescue and sanctuary came true, and this past week, the Whip City Farm and Sanctuary has been the talk of the town because of a little calf named “Teddy.”

“We purchased this farm a year ago,” said Kerry Plourde, noting they have been married 32 years. “This has been Robin’s dream since I met her.”

The couple’s daughter, Jessica Coggin, and her husband Jayme and their 5-year-old twins Camden and Skyler, live “right down the street to help when needed.” 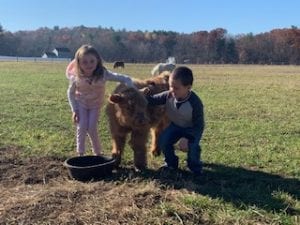 For visitors to their Facebook page – Whip City Farm and Sanctuary – the new resident rescue, a Scottish Highland calf, has made “quite a splash” according to the couple.

“Teddy is absolutely as sweet as he looks,” said Robin Plourde. “He loves people and loves spending time being brushed, pet, and lying his head on a lap for some hugs.”

“Teddy is starting to get some energy and can be superexcited in the morning doing little leaps in the air,” said Kerry Plourde. “He calls out when he sees either one of us for hugs.”

While Teddy has adapted quickly to life on the Plourde farm, not all of the rescue animals have been as welcoming to him.

“Although he really wants to be friends with the turkey, Thomas doesn’t feel the same,” said Robin Plourde. “He has tried befriending the ducks but they … are ducks.”

The couple noted that Teddy is still too fragile to spend unsupervised time with the horses yet.

“He has not yet been with any other calves or cows because he was so sick and significantly smaller than the others the same age,” said Robin Plourde.

Teddy was found in a field in the Sheffield area after a farmer vetted him hoping he would grow and be profitable for beef, according to Kerry Plourde.

“As I have posted on Facebook, he was found in a field covered with maggots and clinging to life,” said Plourde. “The mother cow rejected him, and he spent his short life struggling to survive. Despite all of this, he is such a happy, trusting, lovable calf.”

As for Teddy’s ongoing treatment, he has an appointment with Katie Pruett, DVM, from the Fenton River Veterinary Hospital on Nov. 13.

“Robin is a nurse and comfortable treating the wounds, etc. with the guidance of a veterinarian,” said Kerry Plourde. “I believe Teddy will have some significant vet bills. He leaks urine, seems hard of hearing, and his vision seems impaired. He is unsteady on his feet and I am not sure why this is.”

Currently, there are 13 animals residing in the sanctuary, including a shire draft and saddlebred horse who were adopted from the Connecticut Draft Horse Rescue.

“They continue rescuing horses who would otherwise go to slaughter,” said Kerry Plourde.

Also residing at the sanctuary are two mini horses who were adopted from Gerda’s Animal Aid, an organization that also rescues animals who would go to slaughter.

“We also have Thomas, our turkey, and Eddie, our rooster, and ducks Stewie and Charlie who were owner surrenders,” said Robin Plourde. “We also have Andrew and Randy, twin ducks, and two potbelly pigs, Tootsie and Duke, who are enjoying life wandering around the farm munching and lying in the sun.”

While Robin Plourde’s dream has come true, a lot of work remains as one would imagine when living life on a farm. She is also in the process of acquiring her wildlife rehabilitation license.

“When we purchased this farm we had to build fencing, provide significant updating to the barn, build exterior walls, electrical and plumbing,” said Kerry Plourde, noting the farm on 232 Montgomery Road was sold to them by farmer William Reed.

“We have applied for 501 (c) 3 status and we are waiting for final approval,” said Plourde.

When the couple started adopting animals, they focused on animals residing at rescues looking for a forever home.

“Teddy will be living out all of his days grazing, and being loved and pampered,” said Robin Plourde. “Our plan is to grow and save and/or adopt animals in search of a forever home. Both of us have two jobs to support this sanctuary.”

Kerry Plourde is a skilled carpenter but also completes home inspections after his regular job to help support the sanctuary, leaving little time for the renovations in the barns.

The couple noted that area residents have already made “generous offers” to volunteer and are asking how they can help Teddy and all of the animals in their care.

Robin Plourde added that once their insurance company approves visitors and volunteers, they will post details on their Facebook page.

“We would love to have community involvement and make this into a successful sanctuary that the entire community can enjoy,” said Robin Plourde.

“I am the type that can’t sit for long and am happier when I am busy,” said Plourde. “I do all the building, fencing, repairs, and help Robin when she needs it. We both feel very blessed and look forward to sharing our blessings with the community.”