WESTFIELD – For years, unwary residents of the city’s more affluent neighborhoods have been victimized, apparently by groups of youths from Connecticut who visit the city, often in stolen cars.
These malefactors typically steal the contents of unlocked cars and sometimes the vehicles themselves but two alleged miscreants, having been identified by city police detectives, have been brought before the bar of justice to face the music.

In a 2020 interview, then Det. Lt. Stephan Dickinson explained that the modus operandi of the criminals is to come to the city late at night on weekends when a driver will drop off a confederate in one of the city’s affluent neighborhoods such as Ridgecrest. That person will then walk up driveways and try the door handles of parked cars. When an unlocked car is found, the intruder will enter the car to steal whatever is found.

Sometimes, the car itself is also stolen.

Dickinson explained, with late model cars, the thieves do not even have to look in the cars for keys in order to start them. Surprisingly often, a car will start when the ‘Start’ button is pushed because the key fob is somewhere in the car and the thief can simply drive it away. He said that several vehicles stolen in this way have been recovered in the Hartford, Conn., area.

Detective Jason Williams reports in a court document that such a spree apparently occurred on July 19, 2020. He writes that, in the early morning hours, five vehicles were entered — one each on Glenwood Drive, Bigwood Drive, Christopher Drive, Eastwood Drive and Sunbriar Drive.
Property stolen from the various vehicles included a purse, a check book, a wallet, car keys and numerous credit cards. On Christopher Drive, a 2018 Lexus was stolen.

The theft of the Lexus was recorded on the victim’s home security system and both the Lexus and a Mercedes (stolen in New Britain, Conn.) which the suspects arrived in were captured on video at a West Springfield gas station. There, one of the suspects unsuccessfully attempted to use one of the stolen credit cars to fill the gas tank of the Lexus.

Williams reports that “The Victim’s Lexus was recovered nearby as it was presumed to have been low on gas and was abandoned after not being able to fill it up with gas.”
The Mercedes was recovered later that evening in Hartford and a checkbook which had been stolen on Sunbriar Drive was recovered.

He reports that credit cards stolen at Christopher Drive were used, or were attempted to be used, at various gas stations, fast food restaurants and a convenience store. He documents five fraudulent uses — for amounts ranging from $10.18 to $19.30 – totaling $66.72. 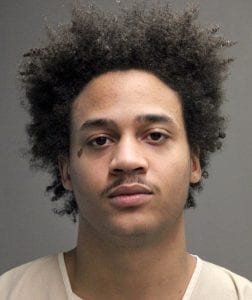 Based on the video evidence and fingerprints recovered from the stolen Lexus, Williams reports, two of the four suspects involved in the crimes (who he reports are in a dating relationship) were identified as Rhian Nunes, 20, and Alijah Picard, 19, both of 142 Park St., Apt. 3, Bristol, Conn.

Nunes was apprehended by Connecticut authorities and arraigned in Westfield District Court on April 21, 2021 (in three cases) on charges of breaking and entering a vehicle in the nighttime with intent commit a felony, larceny of a motor vehicle, receiving a stolen motor vehicle, larceny of property valued less than $1,200 and improper use of a credit card valued less than $1,200.

Williams reports “The Defendant (Nunes) has a history of stealing or being in possession of stolen motor vehicles” citing incidents in 2019 and 2020 in Connecticut.

Appearing before Judge William A. Rota, Nunes was held in lieu of $500 in each of the three cases but posted bail on May, 9, 2021, and was released. He is due to return to court for a hearing on Aug. 12.

His accomplice, Picard, who was also taken into custody out-of-state, appeared in Westfield District Court before Judge John McKenna on June 30, charged with the same offenses. Her bail was set at $100 in each of her three cases. Bail was posted for her on Tuesday and she was released. She is due to return to court for a hearing on Sept. 9.

Williams said that these types of crimes may be prevented simply by locking vehicles and removing valuable items.

“No one’s really smashing windows” Williams said. “If people lock their vehicles or, at the very least, didn’t leave their keys in the vehicles, all this would be prevented.”