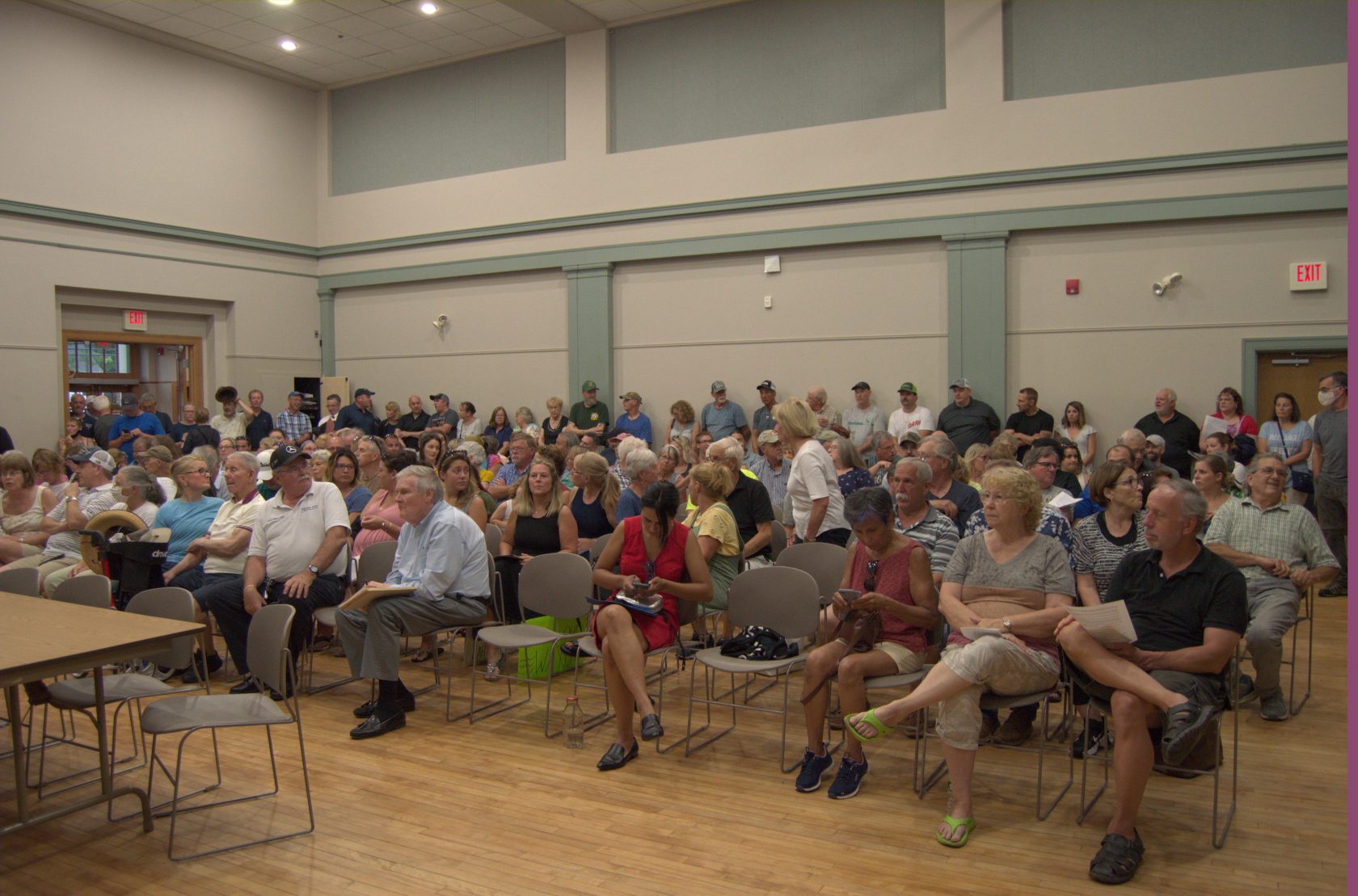 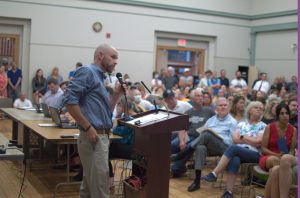 Robert Levesque of the land surveying company R. Levesque Associates shows the crowd the details of the site plan and application on the projector screen. (PETER CURRIER/THE WESTFIELD NEWS)

SOUTHWICK- The Planning Board voted unanimously June 29 to continue the Carvana public hearing to a later date after a contentious and lengthy hearing was adjourned due to the late hour.

The Carvana hearing will continue on July 20 at 6 p.m.

The June 29 meeting ran for more than four hours after hundreds of residents who were overwhelmingly opposed to the proposed Carvana project packed the Town Hall auditorium. The meeting began after dozens of people had been standing outside Town Hall protesting the Carvana project when a severe thunderstorm forced everybody into the lobby at the same time.

Planning Board Chair Michael Doherty began the meeting by urging people in the audience to remain patient as they got used to the hybrid meeting model, especially with such a large number of people in the room. Dozens more people viewed the meeting through Zoom. Technical issues became a major point of contention throughout the meeting, which was permeated by outbursts and rounds of applause from the crowd.

Town Planner Jon Goddard said in his report that he had received at least 10 letters alleging that town boards had broken Open Meeting Law because meetings had taken place regarding the Carvana project when the agenda items only had the the pseudonym “Project Baily.” Doherty said that Carvana is not the actual applicant for the special permits. Rather, it is Brinkmann Constructors, a general contractor that Carvana hired to build the facility if the permits are granted. 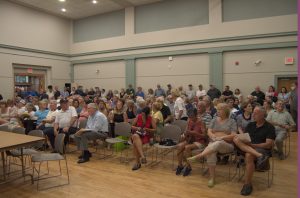 The first hour of the meeting consisted of Doherty explaining the process of the Carvana project and the special permit application, while people in the audience expressed their displeasure with the project in general. Doherty said during the hearing and during the June 28 Select Board meeting that he has been seeing misinformation spread online about the Carvana project, which he said is contributing to people’s opposition to the project.

Rob Levesque of R. Levesque Associates explained some of the details of the site plan for the project. The actual Carvana building would be 26 feet tall and 200,000 square feet on 65.7 acres of paved asphalt. There would be a 300 foot strip of land along College Highway that would remain undeveloped, in part due to a wetland area on part of the strip, and to allow other businesses with a smaller footprint to be constructed there.

He said that evergreen hedges would be planted along the bike trail to help shield the view of the large facility from the trail.

Levesque said that Carvana would also construct a well on the property to have a backup plan in case there becomes a problem with water usage.

A major point of contention for many Carvana opponents is how it will affect traffic throughout the town and in neighboring communities. Multiple people in the audience expressed concern that the large trucks and increase in traffic from employees will create a significant amount of extra traffic in a rural town.

Some people expressed concerns that the potential environmental impact of the project has not been sufficiently studied. Agricultural Commissioner Dennis Clark asked why the Planning Board could not require an environmental impact study to be done before the project can be approved. Doherty said that the Massachusetts Environmental Policy Act is not triggered under state law in this case. He said the bylaw that was passed at the most recent town meeting that would have required such a study was not passed in time for it to apply to Carvana.

Multiple people in the audience specifically asked why Carvana chose Southwick rather than a municipality that has better access to one of the major highways in New England like Springfield or West Springfield. Some specified that the Eastfield Mall would be a better location.

Carvana Senior Project Manager Jennifer Roldan said that Southwick was chosen because the parcel at 686 College Hwighay is flat and is properly zoned as industrial restricted. She said the Eastfield Mall is not currently zoned properly for Carvana.

Attorney Tim Ryan was retained by the unincorporated Save Southwick group that was formed to oppose the Carvana project. He said during the hearing that this project would not have passed in Springfield, and that it should not be allowed to pass in Southwick either.

Doherty said that he and the rest of the planning board are only allowed to consider the special permit based on how the site plans adhere to the town’s bylaws.

After hours of public comment, Doherty opted just after 11 p.m. to continue the hearing to July 20. He said he and the board would try to come up with a way to make a hybrid meeting work with such a large number of people attending via both methods.