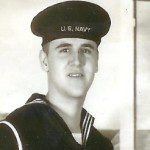 WESTFIELD – Charles A. Breau, 84, of South Gate Avenue, Westfield, died Wednesday, March 20, 2013 surrounded by his family and friends at home. Born December 21, 1928, Charles was the son of the late Joseph P. and Bernadette (Ouellet) Breau. Born in Westfield, Charles was educated in the St. Mary’s Schools and was a graduate of St. Mary’s High School in the Class of 1948.
He was a Korean War U.S. Navy Veteran earning the Korean Service Medal with 3 stars, the China Service Medal, and the United Nations Medal. He was employed in the maintenance department at Micro-Abrasives in Westfield for many years until his retirement in 1990. Charles was a lifelong communicant of St. Mary’s Church in Westfield. He was a longtime and active member of the St. Mary’s School PTO. He was the past commander of the American Legion Post 454 and member of the VFW Post 6714, both in Westfield. Charles was best known for visiting and educating the children of the Westfield Schools on the importance and meaning of Memorial day. He was a longtime driving force behind the preparations for the Westfield Memorial Day Parade. Charles was also a Boy Scout Troop Leader and Commissioner. He was appointed and served the city of Westfield as a Flood Control Commissioner for many years.
Charles leaves his beloved wife of 55 years, Mary T (Moran) Breau; his loving children, Walter C. Breau and his wife Elizabeth Eriksson of Vernon, VT, Joseph E. Breau and his wife Julie (Johnson) of Colorado Springs, and Sharon M. Lisowski and her husband Mark of Westfield; his adored grandchildren, Jeffrey, Miranda, Alexander, Kirsten, Samantha, Stephany, Kristen, Katherine, Kimberly and his cherished great grandchildren, Paige, Dylan, Elizabeth, Connor, Lauren, Emma, Brianna, Mikey, and many blessed nieces and nephews and a host of close friends.
The funeral for Charles will take place Saturday, March 23, 2013 at 9:00 a.m. from The Robert E Cusack Funeral Home, 94 Main Street (Routet 20), Westfield. A Mass of Christian Burial will follow at 10:30 a.m. at St. Mary’s Church, Bartlett Street with burial to follow in St. Mary’s Cemetery, both in Westfield. Calling hours will take place Friday from 4:00-7:00 p.m. at the funeral home.
In lieu of flowers, donations may be made to the Noble VNH and Hospice, 77 Mill Street, Westfield, MA 01085 or the Shriner’s Hospital for Children, 516 Carew Street, Springfield, MA 01104.