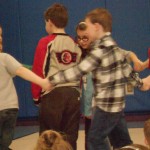 In Chester Elementary School’s first grade group story, Frank and Frances Walkington liked to walk in natural environments, but got into trouble when they were surrounded by crashing waves in the sea. (Photo by Amy Porter) 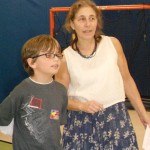 Professional Storyteller Rona Leventhal encourages Chester fourth grader Zachary Barsalou to project his voice to the back of the room, prior to yesterday’s “Story Fest.” (Photo by Amy Porter) 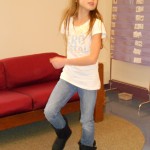 CHESTER – On Friday, Dec. 23, kindergarten through fourth grade students performed stories collectively and individually under the guidance of Rona Leventhal, professional storyteller.
The event, called “Story Fest,” was the culmination of a $5,000 STARS Residency grant from the Massachusetts Cultural Council, written by district grant writer Wendy Long and Assistant Principal Elizabeth Bienia, on behalf of Chester Elementary School. The Chester PTO also donated $750 to cover the remaining costs of the project.
STARS Residencies (Students and Teachers Working with Artists, Scientists, and Scholars) provide grants of $500-$5,000 to schools to support creative learning residencies of three days or more in the arts, sciences, and humanities.
Rona Leventhal is in her twenty-second year as a professional storyteller. She performs for children and adults. She runs adult workshops, including a 3-day storytelling retreat in August in Leyden. She is also a certified teacher, and offers professional development for teachers.  Nanette Higgins, a Chester Elementary School teacher, attended Leventhal’s professional development workshop last year, and suggested the residency for the school.
In Chester, pre-kindergarten through second grade students created group class stories. They learned how to start a story, bring it to a middle point, and to an ending.  Leventhal guided them in choosing characters, a setting and a problem. For example, in the first grade’s group story, Frank and Frances Walkington liked to walk in natural environments, but got into trouble when they were surrounded by crashing waves in the sea. Calling on their friends the seagulls to help, they were able to get away safely.
Third and fourth graders participated in a community storytelling program, based on the oral tradition in which elders told stories to younger people to pass them on.  Third and fourth graders individually learned traditional stories, including “How the Bear Lost His Tail,” “Little Red Riding Hood,” and “Why the Sun & Moon are in the Sky.”  The students then told the stories to the younger grades.
Leventhal taught students to incorporate theater and movement into their storytelling.  Besides technique, the students also learned to consider what was an appropriate story for the age of the audience, and peer coaching – how to critique each other’s stories using nonjudgmental words.
At the “Story Fest” performance, Leventhal said, “Storytelling is the simple act of sharing something important. It is the simple act of listening. It is the simple act of using our imaginations to visualize images that we create ourselves.”
As for her impressions of Chester Elementary School, Leventhal said, “I love working in small schools. There is a wonderful sense of community here, and a great staff.” Leventhal, who admits to having strong opinions about education, added, “We need to have schools the size of this school. Simply for budgetary reasons, we’re developing factory schools which lead to bullying and other problems, exactly the opposite of where we need to go.”