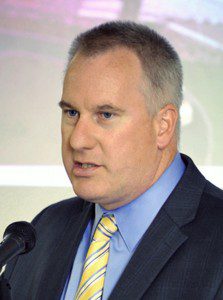 WESTFIELD – City officials are preparing to fill the position of community development director before the start of the new year. The application period for that post closes Wednesday and the selection process is expected to begin in early December.
The position, which has been vacant for nearly a year, is being significantly redefined, as is the roll of the Community Development Department, with less emphasis on commercial and economic development and a greater emphasis on community development.
Many of the functions formerly the purview of the community development director are now being performed by Jeff Daley who was hired two years ago to serve as the first city advancement officer.
The city has also hired a new principal planner, Jay Vinskey, who provides services to the Planning Board, Zoning Board of Appeals, Community Preservation Commission and, when requested, to the City Council.
Mayor Daniel M. Knapik said that he sees the redefined post meshing with those two posts. A primary focus of the new director’s efforts will be housing, especially in the downtown neighborhoods, where underutilized commercial space, primarily on the upper floors, is being converted to housing.
“The community development director will be focusing on developing neighborhoods as part of the greater Westfield community,” Knapik said, “helping to develop market rate housing, senior housing and first-time buyer housing.”
“One of the functions of the director will be aiding private developers to qualify for state tax credits for developing market-rate housing,” Knapik said.
Another area of focus, based upon the downtown revitalization study that developed the theme of ‘Live, Work, Play,’ will be greater emphasis on culture and entertainment.
The new director will work with existing municipal and civic organizations to enhance the “cultural aspect of the community” and support artists to promote the downtown as the city’s “cultural center”, as well as its entertainment district.
“As we move forward with more initiatives downtown, such as the Gaslight District project, the Community Development Department is a critical part of that process,” Knapik said.
“We as a city are moving away from the big-box warehouse model, seeking to develop new manufacturing, and an expanded role for the military,” Knapik said. “S0 we need to redefine ourselves on the national level because we have pushed the big-box identity for a couple of decades. We have to present an image so those entities have a different way of looking at us.”
Assistant Human Resource Director Jeff Krok said the application deadline Wednesday will launch a candidate review process that may include creation of a screening committee, similar to the process used recently to appoint a new city treasurer.
Krok said that the screening or review committee membership has not been determined. The process will provide Knapik with a short list of applicants for his consideration and referral of a finalist to the City Council for confirmation.