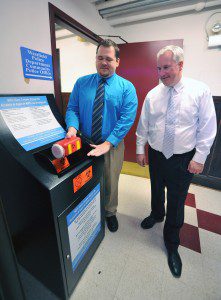 WESTFIELD – The Health Department is providing a facility to help city residents comply with a new state law prohibiting disposal of medical needles and sharps in household trash.
Health Director Michael Suckau notified the Health Board at its meeting on Tuesday Sept. 18, 2012, that the department has begun to offer the services to resident because of the state law which went into effect on July 1, 2012 prohibiting the improper disposal of syringes and lancets in solid waste.
The state has established the new law to protect the environment and the health and safety of trash and recycling facility employees from accidental puncture by medical needles and lancets that could result in transmission of disease and infection. The law also prohibits disposal of medical sharps in recycling programs.
Nationwide, millions of people use syringes and lancets to manage their health care at home.
Suckau said the city launched a sharps collection point at City Hall on Monday, Sept. 17 when a sharps kiosk was placed in the ground floor. Funding for the collection program was included in the department’s 2013 fiscal year budget, which began July 1, 2012.
Residents are required to put the needles or lancets in a container that will fit through the trap door of the kiosk, similar to a mail drop box. Those containers are currently available at drug stores and will now be available at the Health Department, as well.
Suckau said the department will sell one-liter sharps containers at just above cost as “another convenience for people” and to encourage proper disposal methods. Suckau said the one-liter containers will fit more efficiently into the 18-gallon kiosk collection boxes than other sharps containers available commercially.
The Health Board voted to set a $4 fee for the 1.4-quart sharps containers. Suckau said that the containers, which the department will buy in bulk through a state contract, are available in drug stores and other larger stores at a cost of between $4 and $7, but that some stores offer a pre-paid postage container, addressed to a license disposal company, at a cost of up to $30, for disposal of the sharps. Disposal in the City Hall Kiosk is free of charge.
Suckau said residents should not use other containers, such as coffee and soda cans, or glass or plastic bottles, that could be compromised or broken during collection.
The sharps can be placed in heavy plastic containers with a cap, but must be able to fit through the opening of the kiosk.
The Center for Disease Control has established a national goal to eliminate the disposal of sharps in trash or in public locations, such as parks and streets, and to prevent the reuse of sharps, a practice that can result in transmission of infectious disease ,as well as accidental punctures.