WESTFIELD—Efforts to clean out a home where two people died during a fire last month are underway, according to Westfield director of public health Joe Rouse.

Rouse gave an update on the emergency condemnation and clean out of a home at 40 Park St., during a board of health meeting yesterday. The home had an emergency condemnation placed on it by the health department June 30 and required emergency clean out, according to the condemnation. Clean out was expected to finish by July 13 and a second assessment of the home will be done by the end of the week to determine if further work is necessary.

“It was in unsanitary condition,” Rouse said of the property following the meeting. 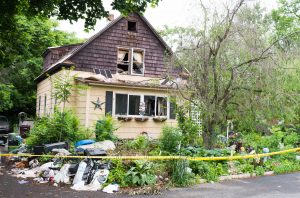 The home at 40 Park St. Westfield where a fire took the lives of two women. (Photo by Lynn Boscher)

The property had a fire on June 16, and according to a press release sent out by the state fire marshal:

“The fire started on the kitchen gas stove top at about 2:30 in the afternoon. On top of the stove was a power strip, underneath a pile of possessions. Whether the materials were ignited by the normal heat emitted by the power strip, a failure of the power strip, or by the gas pilot light, cannot be definitively determined, but the fire is considered accidental.

Two people in the home, Mary Woodworth, 92, and Theresa Woodworth, 54, died because of the fire, after Westfield Fire personnel and the state fire marshal reported the lack of working smoke detectors and an array of items and clutter that impaired rescue efforts.

“The house was filled with excessive clutter that not only trapped the victims inside, but also made it difficult for firefighters to gain entry to the home to attempt a rescue and to fight the fire,” according to the press release. 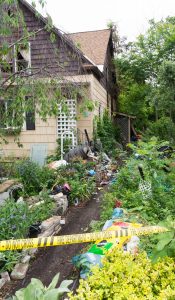 The home at 40 Park St. Westfield where a fire took the lives of two women. (Photo by Lynn Boscher)

According to the emergency condemnation, the home has “[f]ire and water damaged material, rotting food and organic material, accumulation of trash, refuse and debris…Infestation of insects due to unsanitary conditions.”

These were also the findings that were given to qualify the habitation as unfit and “of immediate danger.”

Rouse said that the department wanted to act so that there would not be any further impact on neighbors, such as odors or infestations into their homes.

Also regarding neighbors, Rouse said that they have been helpful to the city, including watching the property, and wanted to commend them.

“The neighbors have been very patient and supportive,” he said.

In order to fund the efforts to clean the property, which is being done by SERVPRO Industries, Inc., Rouse said that the department had to ask for an emergency appropriation of funds, which totaled just under $10,000.

He said that Mayor Brian Sullivan had to do an immediate consideration of the request and city council voted to approve it July 6.

Rouse said that in order to later recoup the funds, the city will be placing a lien upon the home, and eventually when the home is sold the city will get the money back.

And although it has not been determined if hoarding was definitively an issue at the home, Rouse said that if anyone is concerned about someone they know who may be dealing with a possible hoarding issue, they can contact the health department.

“If you have a relative or neighbor with a possible hoarding issue, we will do what we can to investigate and see what we can do,” he said.

He added that the health department, although not an agency that would treat people, does have a number of contacts for those who need or want help.