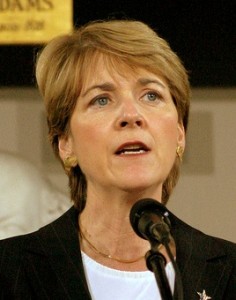 BOSTON (AP) — Attorney General Martha Coakley warned Thursday against expanding the Massachusetts Lottery online.
Allowing individuals to purchase lottery tickets over the Internet would require the use of credit cards, Coakley said, and using credit cards to buy lottery tickets has long been barred in Massachusetts out of fear that it would lure problem gamblers into crushing personal debt.
Coakley, a Democratic candidate for governor, also said there are difficulties in verifying the age of online gamblers.
“I feel pretty strongly that it is not a good idea for consumers. It’s not a good idea for Massachusetts,” Coakley said.
One of Coakley’s Democratic rivals for governor, state Treasurer Steven Grossman, has pushed state lawmakers for permission to test what he hopes will be a first wave of Internet lottery games in Massachusetts.
A spokesman for Grossman, whose office oversees the state lottery, said he also opposes the use of credit cards for online lottery games and doesn’t believe they would require the use of credit cards.
He said one possible option would be to use a card with stored value that can be refilled at lottery retailers. That would also allow the stores to get a commission on winning tickets.
Grossman has said the threat of Internet gambling to existing state lotteries is imminent. Other states are also exploring online lottery games.
In 2012, Grossman pointed to a U.S. Justice Department ruling that reversed a previous stance barring states from conducting online gambling. At the time, Grossman said the new ruling allows the Lottery to market online to in-state adults with credit cards.
Treasury spokesman Jon Carlisle said Grossman believes that any launch of online lottery games should come with two conditions — that the games have no negative impact on the lottery’s 7,400 sales agents and that it not lead to increased problem gambling.
A bill currently before state lawmakers would let the lottery launch online games.
Money from the Lottery goes back to Massachusetts cities in towns in the form of unrestricted aid. In the past two fiscal years, that has totaled $1.9 billion.