FCGRT installed a series of 35 commemorative bricks on the Rail Trail, cementing the first annual brick laying honoring those who have donated. The brick laying is just one more step in the continued improvement of the Rail Trail. 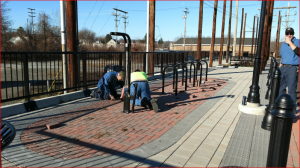 “The bricks are a fundraising device for us, they helped fund other amenities like historical markers,” Joe Giffune, chairperson of the FCGRT, said. “We plan to do public art on the trail and we need to raise funds for that, which this will provide.”

“People will have bricks engraved with messages and names and dates,” Giffune said. “They can do that continuously and once a year we will install them.”

Giffune said that the bricks can be sponsored online at their website, and cost $100 a brick.

This money will go toward other programs FCGRT are hoping to finish in the next year, including a mural project on one of the trail’s underpasses.

“Right now we’re working with some folks in the school system and local art community to begin a mural project at the underpass of Ashley Street,” Giffune said. The intention for that is those walls become public art, like renewable public art.”

In addition to this work, Giffune said that the group is working on projects outside of the Rail Trail itself, in order to make the city more appealing to cyclists.

He said that FCGRT are working on applying for state grants with the Westfield Department of Public Works in order to access funding for bicycle parking throughout the city–also known as bike racks.

The parking would be put throughout the city and would help to promote cyclists to stop at the variety of shops in the downtown area. In addition to the permanent parking, Giffune said that they are also looking at alternative options.

“We’re also working on portable bike racks that we’re going to put in at various businesses to try and gage the access of cyclists,” he said.

These portable racks would be attached to structures temporarily with wire rope, and would allow the city to relocate the racks to wherever they deem it is most needed.

Finally, other work that will be beginning within the next year is the repair and renovation of the pedestrian bridge over the Westfield River, which is part of the Columbia Greenway North. Giffune said that the contract has been awarded and the work will begin next construction season, if not sooner.

If anyone would like to become a part of FCGRT, Giffune suggests going online to their new website, or to attend one of their monthly meetings, which occur on the third Tuesday of every month in the Rinnova building.