SOUTHWICK – The Finance Committee had a discussion with Conservation Commission Chairman Christopher Pratt during the committee’s meeting on Monday night, regarding a concern he had. 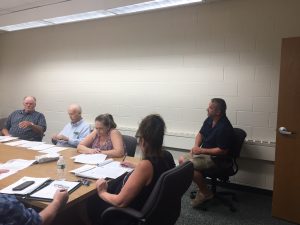 Christopher Pratt, the Chairman of the Conservation Commission, was seen discussing the letter with the Finance Committee on Monday night. (Photo courtesy of Greg Fitzpatrick)

On June 5, Pratt sent a letter to the Select Board, as well as the Attorney General’s Office, about issues he had with Article 17 at the May 16 Southwick Annual Town Meeting.

Article 17 is to determine if the town would appropriate and transfer $1,000,000 from the undesignated Community Preservation Fund in order to acquire property adjacent to Congamond’s North Pond for the North Pond preservation project.

In the letter, Pratt’s overall concern was the publication sheet that was handed out to all residents voting at the meeting that was titled, “Pros and Cons.”

The publication was created by the Finance Committee but the sheet didn’t say who publicized it when it was handed out at the Annual Town Meeting.

Further along into the letter, Pratt elaborated on his concerns with the sheet.

“It appeared that this publication’s intent was to subvert the democratic process of a Town Meeting by expressing many more “cons’ than “pros” for Article 17. The information provided under “cons”, was erroneous and purposely composed in order to deceive the voters, for the sole purpose of defeating Article 17.”

Pratt felt like his letter was a way for residents who may have had an issue with the publication to voice concerns.

“I feel the town should be represented,” said Pratt. “I felt like I was speaking for them as well because many people that were at the (annual) meeting were asking me questions about those facts and I didn’t believe they were to be true.”

“I can assure you that the whole reason for the “Pros and Cons” was to avoid subverting the democratic process,” said Pinell.

Pratt then laid out a number of the issues he had with the “Pros and Cons” publication.

One of the concerns was a misleading evaluation of the two appraisals on the property that were included in the “Cons”.

Although Pratt believed that the appraisal of North Pond may have been biased, Finance Committee Vice-Chairman Bob Horacek said that the appraisals were done in a subjective measure and in a perfect world it is to find out just how much the property would be worth.

Another key concern that Pratt pointed out at the meeting was the fact that the “Pros and Cons” sheet said that approving Article 17 would “drain” the CPC fund.

With $1 million being removed from the CPC account for the acquisition of the North Pond land, Pratt believed the term “drain” to be misleading to residents, since there would be over $150,000 left in that account if the article was indeed approved at the annual town meeting.

Horacek didn’t see that particular term as misleading, mentioning that 87% of that CPC account was wiped away due to Article 17.

Going into more detail, Pratt made this statement in his letter:

“The Chair of the Economic Development Committee spoke to the audience about the lack of validity of the “pros and cons”.  He even called the information supplied in this publication, “bogus”, as he cited 26 new home sub divisions in town.”

Horacek and the rest of the Finance Committee didn’t seem to agree with Pratt’s remarks as they said there were “no new developments” in town.

Horacek added that the last big development in town was purchased 10 years ago and approved about 7 years ago. He doesn’t see that as new.

After Pratt and the Finance Committee finished their discussions about the concerns issued in the letter, Pinell asked Pratt if he would consider a letter of retraction to the Select Board and the Attorney General’s Office.

Pratt then responded that he would consider the committee’s request but hasn’t made a decision yet.