WESTFIELD—Several of the Westfield Fire Department’s vehicles will now be able to use Cowles Bridge during emergencies, after the waiver was officially received Wednesday.

The Westfield Fire Department (WFD) has officially received a waiver from the Massachusetts Department of Transportation (MassDOT) that will allow for four of their five engines to cross the Cowles Bridge on Southwick Road along Route 10 and 202, culminating what turned into a months-long effort.

The waiver comes with restrictions according to WFD Fire Chief Mary Regan, which includes a speed restriction of 5 MPH and that the bridge may only be used when responding to an emergency. Still, according to Regan Wednesday, the department will begin using the bridge immediately. 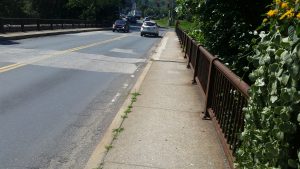 A portion of Cowles Bridge, which is along Southwick Road.

“The WFD would like to thank the MassDOT and our Local and State Officials for their assistance in getting this waiver approved,” Regan wrote in an email.

“Our mission of protecting lives and property is enhanced by a rapid response and this waiver will ensure that we get to this area of the city in the most efficient way to provide the necessary services during an emergency,” she said in the email.

Westfield Mayor Brian Sullivan said that he was also satisfied with the result.

“We’ve now taken care of the safety issues regarding getting trucks with water over that bridge in an emergency basis,” he said. “The process, though very lengthy, actually has an outcome that’s favorable for the city.”

According to Patrick Marvin from MassDOT, they analyzed the bridge and determined that it would be safe to use in the manner outlined.

From an email sent by Marvin:

“The Massachusetts Department of Transportation has been pleased to work with the Westfield Fire Department in order to support the reliability of the bridge structure and ensure that emergency first responders are able to utilize this bridge.

MassDOT has reviewed the request for a waiver, analyze the structural capacity of the bridge in relation to this request, and concluded that the bridge is able to accommodate most of the department’s vehicles at low speeds during emergency responses.

The department has not been able to utilize Cowles Bridge with a majority of its vehicles since Aug. 3, when they received a letter from MassDOT requesting that vehicles that exceed the posted weight limits not cross the bridge. Previously, the department had been utilizing the bridge with their vehicles when responding to emergencies. 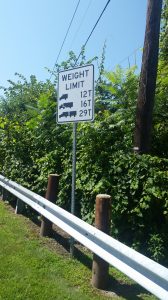 Since the letter was received, the department had used different methods to respond to the other side of the bridge, though delays in responses had occurred.

Also following the letter, Regan sent a waiver request to MassDOT. It was initially reported that it may take about three weeks for the waiver to come. However, as that time passed and a waiver was not received, concern had grown in the city.

In September, the City Council’s Public Health and Safety Committee held a meeting with city and state officials to discuss the status of the waiver. Rep. John Velis also said that he had placed pressure on MassDOT, continuing to try and get a determination on the waiver.

Velis then reported this past Monday, Nov. 20, that a waiver would be coming to the city.

“Any time that the city of Westfield has an interaction with the state, whatever Westfield wants I make sure it isn’t sitting on the bottom of a desk,” Velis said. “The squeaky wheel truly gets the oil.”

Sullivan also noted the work from Velis and others in successfully getting the waiver for the department.

“Thank you to the state and local officials that pressed the topic and finally got the waiver we were hoping for,” Sullivan said. 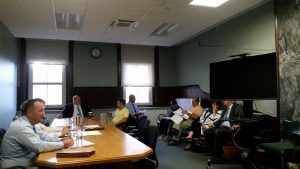 Several city and elected officials gathered in a room at city hall for the Public Health and Safety Committee meeting Sept. 7 to discuss Cowles Bridge.

Velis said that he is happy with the end result, notably because Regan is happy.

“I’m happy that now our emergency response vehicles can get to where they need. Helping the safety of my constituents is my foremost priority,” he said.

Velis also noted that the timeframe was reasonable considering the state and its workings.

“I think a lot of the times we tend to lose sight of the fact that there are 351 cities and towns in the Commonwealth, sending requests to departments in the state,” he said.

Now, Sullivan and Velis both said that the city must wait until repairs and reconstruction on the bridge can occur. According to both, the bridge is on MassDOT’s State Transportation Improvement Program for FY 2019. In addition, Marvin said last week that MassDOT has been continuing on the design process for the projects and that this will likely progress to “where a design public hearing can be held in the first half of 2018.”

“This is just a waiver until such time that the construction starts,” Sullivan said.

For that, Velis said that he will continue to be the “squeaky wheel.”