SOUTHWICK – At last Thursday’s meeting, the CPC (Community Preservation Committee) took a vote regarding use of $150,000 of funds for engineering and design permitting for canal dredging near South Pond on Congamond Lake.

The vote was 7-1 against the proposal. According to DPW Engineer and Lake Management Committee Chairman Dick Grannells, the canal is the only viable outlet for Congamond Lake.

To some, there is not enough water in the canal, therefore dredging of the canal could be necessary. Before any dredging could occur, the town of Southwick would have to apply for the engineering and design permitting, in which the CPC would have to take $150,000 out of their fund. 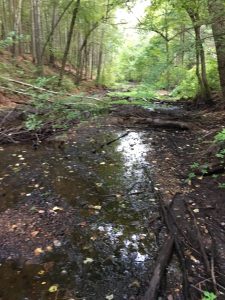 The canal near South Pond would have been potentially dredged if the CPC voted in favor of the proposal. (Photo from Lake Management Committee)

John Whalley, who is the Chairperson of the CPC, was one of the seven individuals who voted the proposal down.

“I think it’s a very important and worthy project but I don’t see it as a good use of CPC funds,” said Whalley about his decision.

Whalley also pointed out that he believes the town should be paying for the engineering and design permitting and not the CPC. The Chairperson felt that the $150,000 wasn’t going to completely secure a grant in order to dredge the canal.

“I want to spend our money on things we know are going to turn out well,” said Whalley.

The one member of the committee, who did vote in favor of the $150,000 application, was Bob Horacek. He was disappointed with the result of the vote.

“I really think that the committee based their decision on other commitments that they’ve made and they didn’t look at the project on its own merit,” said Horacek.

Horacek sees the project as a clear benefit for the residents of Southwick.

“I look at it as more of a universal focus,” said Horacek. “It’s taxpayer money that should be used to benefit taxpayers in town.”