Students from White Oak, St. Mary’s, Westfield High School, Westfield Technical Academy and Southwick-Tolland Regional School attended the third annual Greater Westfield Credit for Life Fair at WSU yesterday morning. The fair, which was mostly run by volunteers and the Westfield Public Schools, helped to educate the students about financial literacy, managing money and employment, along with real-world applications of skills learned in the process.

“It was really helpful—I didn’t know how to live a life until now,” Katie Hathaway, 18, of Westfield High School, said. “It opened my eyes to reality.” 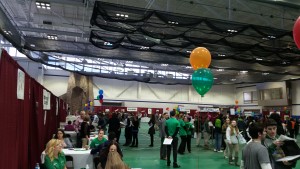 Student mill about in the Woodward Center at Westfield State University during the Greater Westfield Credit for Life Fair, March 16, 2017

Hathaway was among the approximately 330 students that showed up to the Woodward Center, who found their ways through stations set up like a job fair—but instead of jobs there were stations for real-life monetary decisions. At one station a car could be purchased, at another insurance could be bought for both themselves and an automobile, then at another a student could find just how much food and entertainment really do cost.

However, in order to fund all this each student had to get a job. Many, like Hathaway, who became a dental hygienist in the scenario, chose to get a degree in order to earn more. However, those degrees came at a price.

“Degrees are more expensive than I thought,” Hathaway said. “But it wasn’t that bad.”

Others, like Kenny Flores, 19, of Westfield Technical Academy, opted to go the route of civil service—specifically the armed forces—to make money, which in turn helped inspire him, as well.

“I liked it, it helped a lot,” he said. “They really prepared you for the future and for real life.”

Flores said that he is currently pursuing studies in the electrical field but he is now also considering the armed forces, which he said also offers electrical professions.

Students had over 100 options when it came to careers, with each job being researched by Tina Macy, the volunteer coordinator of Westfield Public Schools, and her team. The careers gave the students the average salary of their chosen position for a 25-year-old in the Pioneer Valley. In addition, students were given $2,100 in a savings account and the possibility to apply for lines of credit, depending on the credit score they were given at the beginning.

And throughout the entire event, volunteers were around to help the students pursue their financial goals. The volunteers operated the stations, helping to navigate what each student could purchase, what could occur next, and in the case of part-time jobs—where I was stationed as a volunteer—interview and quiz students for positions that they could apply for to earn some extra money.

The other benefit the volunteers provided for the students though, was advice. In one particular case, Dick Caruso, who helped to operate the part-time jobs station, kept giving out the same advice to students who applied for positions—have good references. 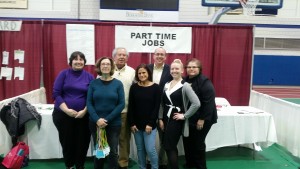 “You have to have references other than your friends,” Caruso said. “You can’t include mom or your buddy, you can’t do that. No one will hire you unless you focus on that.”

It wasn’t just an experience for the students, however—the volunteers earned a lot out of it, as well.

“It was wonderful to see so many students engaged while learning practical skills,” Jason Jean from Homestead Mortgage, said.

This was Jean’s second year participating and he helped operate the housing station, where students had to find a residence that fit within their budget, which included the potential for room mates. Additionally, students had to furnish their abodes, with each item ranging in costs.

“I was surprised how enthusiastic some students were and how dedicated they were,” Jean said.

“I thought it was amazing, truly amazing,” Cathy Gendreau, who volunteered at the part-time job station, said.

“They get it, at the end they got it and that was the best,” she added.