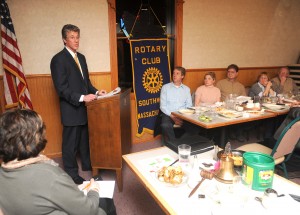 SOUTHWICK – Hampden County District Attorney Mark Mastroianni was the guest of Southwick Rotary Club at their regular weekly meeting Wednesday evening and, after dinner, shared some of his office’s challenges and successes with the members of the club.
He said that the biggest change he encountered when he made the transition from private practice to the D.A.’s office was managing the office’s $8 million budget.
He said that although it sounds like a large budget it is actually very tight and is mostly used to pay employee salaries.
“That eight million dollars is burned up awful quick in the salaries that we have (so) we had to find ways to come up with new money” to retain employees who may be tempted to leave the D.A.’s office to earn more money. He said that his office employs 125-135 employees including 60 assistant district attorneys and 27 victim witness advocates who have prosecuted about 18,000 cases over the past two years.
“The biggest struggle” he said “is meeting the budget needs of keeping employees” and noted that, when he was first starting his legal career, he left the D.A.’s officer after a five-year stint as an assistant district attorney “because I wasn’t making enough money to raise a family” so he went into private practice.
Mastroianni said that since taking office he has instituted a number of reforms to save money in the budget, including updating the telephone system, improving records keeping procedures and replacing the office machinery and the service contract for that machinery.
But the budget still faces strain from other directions, such as overtime pay for the state troopers assigned to his office and “the D.A.’s office pays the price tag a lot of times for initiatives that the state police are involved in.”
He cited examples of expenditures that have paid off, including improved surveillance camera systems, which he said have been instrumental in securing a number of convictions, and equipment to effectively enhance and display the often poor quality surveillance video for juries.
For those sorts of expenses, Mastroianni said, he can sometimes access to drug forfeiture funds garnered from the seizure of ill-gotten gains in drug offenses.
“We have a very healthy drug forfeiture fund in Hampden County” he said and explained that while the fund cannot be used to pay salaries, it can be used for any other purpose which he can justify to the legislature.
For example, he said that he was able to use $45,000 from that fund as “drug buy money” and he said that use of those funds “has gotten us well over 1,300 grams of cocaine, 200 bags of heroin, close to 500 Percocet pills, several hand guns, several motor vehicles and several bank accounts.”
Mastroianni also cited some of the community outreach programs which have been initiated by his office.
He mentioned the “Bullying Institute” which was staged at Westfield State University last summer for which his office paid more than $18,000 to fly speakers in from across the country to speak with school administrators, guidance counselors, teachers, principals and school resource officers about bullying issues in schools.
He also told the Rotarians about a Youth Advisory Board he established to involve high school students .
He lauded communities which have been able to assign a school resource police officer to their high schools saying “it’s been enormously successful at averting a lot of real problems … if the school resource officer is picked appropriately.”
He credited feedback from students for alerting his office about issues such as “K-2” synthetic marijuana, which has become available in convenience stores and “fight clubs” in which “kids will get together and arrange who’s going to fight”, make a video of the “grotesque and brutal” conflict and post the video on the Internet.
Another program to benefit high school students is a “Distracted Driver Program” which has been recognized across the commonwealth for successly making them aware of the dangers of driving with distractions such as text messages, alcohol or drug use, speed or “fooling around.”
To benefit the elder and disabled members of the community, Mastroainni said that a unit has been established to deal with cases of elder abuse. He said that many cases are about family member caretakers who neglect their charges and also said that a surprising number of home health care workers are “people who have been through the criminal justice system (and) might have a hard time finding a job somewhere else, they have an easy time getting a job as a home health care worker” and “sometimes they rob these people blind.”
The new unit, he said, is actively involved, working with social service agencies, in pursuit of those kinds of cases.
And another change, he said, is to minimize the trauma of child abuse cases by preventing the young victim from being subjected to “multiple, multiple, multiple interviews” and instead may be interviewed only once by a specifically trained forensic interviewer, whose videotaped interview is made available to all the involved agencies.
Mastroianni said that, most recently, his office recently competed for a large grant to reduce domestic violence cases, which his office won early this year.
He said that his office will now be able to hire advocates for domestic violence victims and will be able to send prosecutors for training specific to prosecution of domestic violence cases.
He said that the grant will also allow the D.A.’s office to partner with two women’s shelters in the count and the sheriff’s department to start reaching out to victims of domestic violence, especially to those beyond the Springfield and Holyoke areas and to reach out to the currently underserved hilltowns.